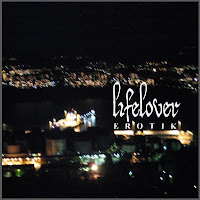 Whether one loved or hated this Swedish band's bleeding or bloodied girl debut, there was not really a question as to whether Lifelover were bringing something new to the table. Various traces of outside sources certainly make their way under the compositional eaves, as they do with any new artist or collaboration, but the whole was endearing enough to admit the band were onto something, which would draw divisive lines between the hipster attuned and grim cybernauts of the necrocosm. Just what the fuck was this band doing? Clearly this was not your pastor's feared black metal, so one could only ride the vapors of their fusion or rally against any and all change they might offer the jaded, stagnant genre they originated from.

Erotik is neither brilliant nor vomit inducing, but in my opinion the slight improvements to their core aesthetic formulate a slightly superior entity to the debut Pulver. This is still the same jangled mass of melancholy, samples, doom and depressive rock integrated with the compulsive and raw repetition of melodic black metal guitars, all set against a darkening journey down a fat hole, with a drum machine as your pilot. However, where Erotik succeeds over its older sister is in the ability to haunt the listener, for this might just remain the most frighteningly intense of Lifelover's offerings, even though it tidies up rather nicely in the production department. The pianos and guitars were a step up from Pulver, and ( ) ventured into a grimmer territory here as evidenced in particular tracks like "En Man I Sina Sämsta År".

That song is actually an excellent place to start poring over the stubborn delights of this album, because the wailing melodies that open it burn themselves directly into the conscience, soon parted for sympathetic pianos and thick, oozing bass and chords. The vocals here are nearly death metal gutturals, and the result is a glorious, charging testament to depression rather than some subtle sacrifice upon the altar of lamentation. Other tracks like "Dödens Landsväg", "Sweet Illness of Mine", "I Love (To Hurt) You" and the soaring "Välkommen Till Pulvercity" all capture a similar imagination, as if all the negative emotions of regret that haunted the Swedish urban nights this album was recorded were to accumulate into a vortex of saddening majesty and then rape your earlobes. Not all the chord patterns here are immaculate, but they do the trick, and it would be difficult to ignore the raw, blissful energy.

Of course, it would not be Lifelover without some measure of diversity, and this is felt in most of the neighborly tracks to those I've already swept across with broad strokes. "Saltvatten (Du + Jag VS. Tellus)" makes use of sparse, clean guitars as it breeds the pangs of sharp despair like a blade carefully caressing a wrist, unsure of whether or not to make that final plunge into the blood line, severing the right and will to live. "Besatt" also uses the clean, ringing tones as it shuffles forward like some hybrid of shoegazing rock and celebratory, warm folk, and then the following "Höstdepressioner" continues the mood, adding more glorious melodies (a little dash of The Cure there in the background, behind the samples). I did draw the impression that perhaps there were too many clean guitars in a row, but then, this is a band that could likely create an entire album around such pieces with success.

"Humörets Bottenvåning" makes for a fine interlude, a quaint trip hop beat pumping below some tasteful pianos and electronic swells, but it should have been the outro, because the two tracks that conclude the album are probably the weakest. "Museum of Past Affections" looked good on paper, and the cleaner vocals are interesting, but the riffs tend to grow tiring after merely a few repetitions, the glorious pattern implied just not all that impressive next to the earlier ragers here. After this, the 11 minute "Nitlott" spends about half its course in rustic folk, then shifting into more of the band's ringing little guitar melodies, and finally a warped approximation of black/doom with samples and reversed vocals. Strange enough to fit the band? Sure, but not that interesting of its own accord.

Unlike the debut Pulver, I will admit that this sophomore has only grown on me in the few years since its release. My preference remains for Konkurs, the third full-length, which I still find to be the greatest balance of beauty and misery that this band has yet crafted, but surely the ground work had been well laid here in Erotik's back alleys and rusted public works. This album might not have a beautiful blond in her bloody birthday suit embracing a rocky, lichen-crusted surface, but its evening cityscape is well suited to the musical content, a festival of lights that hover at the edge of total, bleak annihilation, a surge of desperation that the heart might have emptied, but the blood still burns for tomorrow.