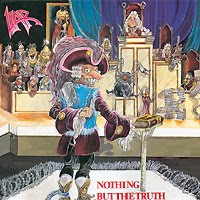 Liar was one of the earliest signings to the Century Media roster overseas, notable for the fact that they were playing a fairly unique hybrid of power and thrash metal with keyboards that simply was not a common thing to hear in the late 80s, especially when so many bands were choking up the latter genre and few exploring the more melodic path. The debut Nothing But the Truth is the worse of their two efforts, with a number of strong selling points that are sadly put off by a few flaws and a dearth of catchy, quality numbers. But for interesting parties seeking something a little outside the usual, there might be just enough to recommend here.

What made Liar so original was simply the unexpected clash of constituent elements that went into their sound. The riffs were a mix of traditional power triplets and harsher thrash attitude, with the chosen distortion falling firmly into the latter camp. Vocalist 'The Duke' had a distinct style which fell somewhere in between Chris Boltendahl of Grave Digger and Jon Oliva of Savatage, probably closer to Oliva. Add to this the full time keyboard player 'Bone' who layered in a lot of cheesy 80s prog/radio metal tones that were almost constantly ringing off against the raging guitars and vocals, and you come up with something that feels strangely out of focus, yet nonetheless functional.

There are also some pretty distinct and lame 80s'isms (is that a real term?) which hit right up front here. The intro to "D.C.W." is extremely cheesy. 'The State of Rock'n'Roll vs. The Baron?' skit feels played out, quite similar to that of Running Wild's lovable "Port Royal" intro, but instead intolerably lame. Plus, the song is called "D.C.W." which stands for "Dirty Crazy World". Silly 80s thrash bands with their ridiculous acronyms, why not just call the fucking song "Dirty Crazy World"? As far as I can tell, "D.C.W." is not in common use, nor was it ever. Semantics aside, this is actually a crazy fun song with some wild riffs that trudge into a forceful thrash gait while the keyboards help escalate the atmosphere, the gang shouts are well placed and though there's not enough to really round out 6:30 in length, you are at least interested in what else the band has to say. "Dance on Fire" opens as if it might be a more serious prog metal tune, but it's quite deep, grooving and heavy, with The Duke going apeshit on the vocals in the pre-chorus, gang shouts once again ruling the chorus itself alongside his incessant Jon Oliva grumbling.

"Batman" is sadly not a cover of the TV show theme, but it does actually deal with the caped crusader and his fictional setting of Gotham City, the Joker, Penguin and Arkham getting a name drop here, as well as the Batmobile. On one hand, it's a decent song with some plunking bass lines and a suitable soaring power/thrash anthem to the superhero, at least for the 80s. On the other, it's just another tiny example of how weird and varied the album feels. "Lonely Boy", however, IS a cover song of the Sex Pistols, but sounds more like Savatage covering a Ramones tune. Coming after "Batman" it feels pretty unusual, but the band seems to right themselves out with the following "See You Again", one of the more intense tracks on the album, with a clinical and schizoid feel to the chorus as the backing vocals eerily repeat the first words in the pre-chorus lines. Great guitar lines and the cheesy synthesizers really come together here to produce a fist banging effect.

The remainder of Nothing but the Truth is a jumble of similarly, well-executed fare like "War (No Solution)" and the glorious charging of "It Hurts", which suffers only in some of the vocal performance. The CD bonus track "Hello My Friend" reinforces the strange Savatage comparison as its a piano ballad with The Duke attempting to give the most melodic effort he is capable of, but it falls flat on its face for that very same reason. "I Don't Care" has some crazy synthesizers that feel like an alarm system at an asylum, and "Run For Me" rocks somewhat steadily as the keys dominate the chugged verses.

I want to like this album a lot more than I do, because it was just so unexpected for the time. Unfortunately, the elements seemed jarring enough on this debut that little attention was given to the band, so this wound up their only record released through Century Media. Perhaps the idea here was ahead of its time, as it feels like some warped love child of Savatage, Testament and Dream Theater's debut (before they exploded). Perhaps people were just too deep in their Metallica and Slayer worship to notice. At any rate, the album's a curious little oddity that might appeal to fans of the heavier progressive power/speed thrash metal bands of this period like, say, Mekong Delta or 80s Rage, but the sillier moments and lack of truly gripping songs make it fast to wear out its welcome.