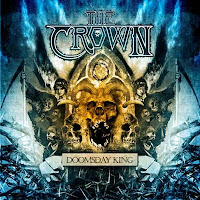 A decade after The Crown made their 'definitive' statement of fuel injected death/thrash, Deathrace King, they have yet again surfaced their royalty in Doomsday King, which feels as if the years have passed almost without skipping a beat. Of course, those beats did actually pump at the heart of the band, and they cycled through a number of vocalists like Tomas Lindberg (At the Gates) and their original frontman Johan Lindstrand (now with One Man Army and the Undead Quartet), producing decent efforts like Possessed 13 and Crowned in Terror, but despite the presence of yet another vocalist here in Jonas Stålhammar (God Macabre, Utumno), the material feels thematically close to their turn of the century blitz.

The rest of the lineup here is retained from the band's heyday, after transforming from the more melodic/black metal oriented Crown of Thorns. Janne Saarenpää still hits like a motherfucker, Marcus Sunesson and Marko Tervonen focus the impact of their riffing like artillery fire, bassist Magus Olsfelt plodding along, loading up more shells into the gunnery. A lineup this tight and well acquainted have no other option than to execute a solid beating upon the listener, and to that extent, Doomsday King delivers adequate bruises. Doomed tolling and doomier guitars herald the title track, as thick chords broil towards the thrash and thrust of the inevitable blade storm the band are packing in their imaginations. Stålhammar proves very quickly that he is the right person for this job, with a death metal bark closer to Lindstrand than Lindberg, and then we are off to the races with the Slayer influenced (in both title and riffing) "Angel of Death 1839", a volley of brutality that should get get the windmills swinging in the pit.

The rest of the album shifts between two poles. The stupendous, manic thrashing of "Age of Iron", "Soul Slasher" and "Desolation Domain" are all yet again heavily influenced by Slayer, only with this band's thick death metal drive and a dash of the Swedish death of At the Gates, Entombed and so forth. Then you've got your longer, more fleshed out tracks like "From the Ashes I Shall Return" and "He Who Rises in Might, From Darkness to Light", both of which have a number of superb riffs, and atmosphere to boot. "He Who Rises in Might..." comes the closest to sheer death metal brutality, and the drumming here should be pointed out as particularly superb, especially the bridge madness. I feel like my sole favorite on the album would be "Through Eyes of Oblivion", a faster piece with some exceptional riffs that really got the blood flowing through me at an excited pace.

There are not a great number of riffs on Doomsday King which stand out to memory, even after successive spins, but as a whole the record more or less delivers everything this band stands for. As a functional ass kicking, it's easily the measure of their previous two full-lengths and deserves to be placed alongside Hell is Here and Deathrace King as an example of the band's better work. The production is sheer hostility, perfectly married to the warlike riffing as tiny threads of angry melody erupt at the edge of perception. The album is superior to the latest from fellow Swedes Witchery, and it offers no apology in handing you your ass, but the musicality is more violent than durable.