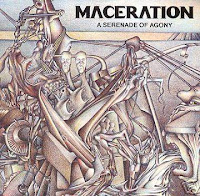 Maceration was the work of Jacob Hansen and Jakob Schultz, the two 'Jakes' of Danish death/thrash cultists Invocation, and a friend, guitarist Lars Bangholt. The sole official release from the project, A Serenade of Agony, was released in 1992 between the Excursion Demise and Weave the Apocalypse albums, and after a few listens, it becomes evident why the project was left on the shelf: it's passable but generic death metal that, for its day, was not offering a lot of new ideas to the genre, whereas the members' main band Invocation was an explosion, a storm of riffing and energy that blitzes past this record without ever turning back to offer condolences.

But despite its shortcomings, which are largely reserved to its songwriting alone, A Serenade of Agony is least a competent middle of the road death metal record which owes some of its charms to that 'other' member joining the Invocation blokes: the unstoppable Day Disryaah, who most know as Sweden's Dan Swanö. Aye, he of Edge of Sanity, Bloodbath and a hundred other bands, in addition to his well regarded production and mixing resume. He operated here under the same pseudonym he would use in some other, earlier projects like the bizarre Pan.Thy.Monium, and his role was that of vocalist and keyboards. The latter appear only briefly throughout the album, in particular the morbid piano intro to "Silent Lay the Gentle Lamb" which then leads into a riff reminiscent of the first few Death albums.

In fact, most of the material bears a similarity to the Florida gods, both Death and Obituary, as opposed to the Swedish flavors of the month. Sporadic bat flights of evil leads grace the very simplistic, bass-thick morass of old school death metal and Dan's full frontal guttural barking, and the tones are consistently pummeling and punishing through tracks like "The Mind Rampant", "The Forgotten" and "Transmogrified". The real issue here is that so few of the songs seem capable of anything more than this vocal atmosphere and passable riffing. There is never a welcome surprise awaiting around any corner, and though the 'menace' of the guitars is clear and present, it never feels so effective as something from Cause of Death or Leprosy. From a proficiency standpoint, the band is well behind Invocation, though that was likely the intent, to create a pure, old school strain of death metal before we had even deemed it 'old school'.

Sadly, for every brief flash of brilliant, wild soloing or insurmountable evil, there are a half dozen or more dull, numbing riffs that feel as if very little effort were placed in their conception, and Maceration ultimately fails to make much of an impression beyond those intrigued by the lineup. The songs had even less of an impact on me than the Edge of Sanity debut Nothing But Death Remains (decent, but not memorable), and when so much fascinating death metal was exploding from European territories, this was very likely to be abandoned by the attention spans of anyone who visited it, despite its few ghastly and morgue-infused moments of depth. I could see someone obsessed with Swanö's many brutal projects tracking this down just to hear his performance, which is adequate as usual, but anyone seeking a riff storm of diabolical potency had better turn elsewhere down the retro path.