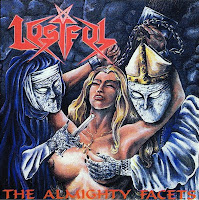 Though my search through the obscure Brazilian territories rarely turns up a qualifying gem, I have long held a fascination for the explosive extreme metal scene in that vast South American realm, starting with the dark blackened thrash of the late 80s through the death metal outbreak of the following decade, into the current. A chief source of cult interest would be the near legendary Cogumelo records, responsible for a great number of underground acts like Chakal, Sextrash, Sarcófago and Vulcano. There is simply something so perceptibly raw and diabolic to the output of these bands that I feel some primordial attraction, even when the actual riffing falls behind the caustic, hostile atmosphere.

Into this metropolis of morbidity thrusts the unknown Lustful, a band who produced a number of demos through the earlier 90s, signing a deal with Cogumelo for their debut The Almighty Facets, a title which seems unintentionally raunchy and humorous considering the sick but seductive, comic book 'appeal' of the cover art. Here is an unrelenting if derivative death metal band who somehow manage to put a smile on the face despite the lack of trying to truly stand out among the mindless and myriad hordes of similar bands in the middle of the 20th century's closing decade, overcoming the substandard production woes to produce an article both genuine and crushing. Essentially you've got a filthy South American thrash/death influence here hailing from a Sepultura or Sarcófago crossbred with US influences from the usual suspects in Morbid Angel, Deicide and Suffocation, a band affixed with blasting menace, carnal grooves and viral outbreaks of sloppy lead work that resemble those of Slayer or Morbid Angel.

The Almighty Facets has a boxy, crude guitar tone which seems messy and antiquated in the rhythmic core, but far brighter and more attractive when panned to individual speakers. The vocals of Rodrigo de Carya are disgusting, like an extreme take on Jeff Becera of Possessed if he were to growl a lot deeper. There are 13 tracks here in close to 40 minutes, most of which are too short to wear through the welcome veil of fresh abuse that one wears when exploring nostalgia for all things ghastly and extreme, but taken in context they can be fun while they last. Several evoke straight up old school death metal lines like "Pride and Fear" or "The Drunk", while others seem to operate on a thrashing/speed blitzkrieg, like the short but intense "Manic Blemish". Most attractive are the songs which build upon compelling intros, like the creepy "No Sense" and its opening synthesizers and guitar riff, or the wall of ripping feedback that inaugurates "Buried Alive".

Not all of the riffs are worthwhile, and the lion's share seem to be all too typical of the day and age, though this might not completely interfere with the cravings of the primitive underground advocate, the only breed of man out there that would be interesting in such a band as Lustful. The solos are well enough written, like in the closing track "Seven Almighty Faces", but nothing terribly inspiring. Aside from the intros and the rather uneven mix of the record, it's not long on atmosphere, but then, these aspects do provide enough menace that the name of the band will stand to memory, even if so few of the individual songs do. It's a solid debut if you're not too picky about technicality or innovation, which were not often major selling points of this period, and something worth breaking out once in awhile if you're interested in the lower tier Brazilian bands and their level of attitude, aggression, and blood-thirsting purity.

Posted by autothrall at 8:32 AM