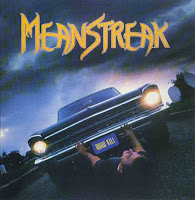 The first time I heard the debut Roadkill from New York's all female street thrash outfit Meanstreak, I admit I thought that the members of Overkill had stepped through some strange gender bending machine and emerged as lethal vixens, so similar is the sound, but when you really dig deeper, small differences begin to emerge. For example, vocalist Bettina France's style often veers more into the territory of Eric A.K. Knutson of Flotsam & Jetsam, with the exception that she's got a better chance at an effective range. The guitars also take the occasional tangent, as you can hear both a classical and classic rock influence in the playing of Marlene Apuzzo and Rena Sands.

For the most part, though, the initial half of the record bounces between two poles: Overkill and Flotsam & Jetsam. The album's title track opener sounds like it could have appeared on Taking Over, with a savage burst of violent speed, France's vocals just as much reminiscent of an asylum escapee as Bobby Blitz. The guitars pack in some decent fills, and though the bridge at times seems sloppy, the lead itself is magnificent while it lasts. "Searching Forever" strides down a mid-paced power metal path, drawing slight comparisons to an Omen or Fates Warning, while "Snake Pit", despite the occasional unwanted clutter, reminds one of "Hard On You" or some other rock influences piece from Flotsam's "No Place for Disgrace". "Nostradamus" teases at some sorry ballad, but then turns around and delivers another solid, pumping power metal atmosphere with some thrash breaks.

After this, Meanstreak suddenly begin to broaden their horizons. "It Seems to Me" brings in a Maiden influence, especially the verses that dance in and out of the initial, melodic thrust, whereas "Lost Stranger" is almost pure Judas Priest or Steppenwolf worship, with a rock groove in the verse and extremely basic chord composition. "The Warning" dives back into the power/thrash mayhem, fusing it with a straight up metal attitude. The rhythm section works hard here, the bass of Lisa Martens Pace popping off and Diane Keyser's fills a real highlight. Closer "The Congretation" takes yet another turn, opening with a volley of technical thrash and then surging to what might be the most aggressive riff on the entire album. The middle of the track slows to some grooves and unusual percussion like gongs and woodblocks, and judging by the 7 minute length, this was obviously the 'epic' of the record.

Meanstreak is rarely spoken of anymore, despite the buzz they once had here on the East Coast as perhaps the first 'serious' all girl thrash metal band. Obviously the gender played into their popularity, since the genre was so male-dominated (always has been), but let's make no mistake about it, this is no gimmick band. Girls can give the thrash as good as they've gotten it, and Roadkill is but one shred of evidence. The debut isn't perfect, and in truth it can feel a little scatterbrained. It's also pissed off, serious and shows a wealth of potential despite the obvious sources that have influenced the style. Sadly, the band is best known now for the three members that married guys from Dream Theater. Judging by how wussy they make their husbands' music seem by comparison, I think we all know who is on top wearing the pants.