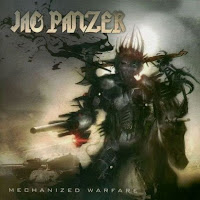 It's probably no secret that I'm a steady consumer of science fiction and fantasy, mostly the good stuff (sometimes the awful), and I've always lauded the use of such genre concepts in fusion with metal music. Thus, my first glimpse of Jag Panzer's sixth full album Mechanized Warfare had the underpants stirring for sure. Could it be that the restless Colorado warriors had crafted a concept album about futuristic military operations involving giant mechs? This was my hope as I first dove into the contents of this record, but to my disappointment, it would not turn out to be the reality. No, Mechanized Warfare is not another unified concept album like Thane to the Throne before it, and while the topics of war are certainly explore in the lyrics to several of the songs, this is no Battletech or MechWarrior of power metal proportions. It could still be done, though. Someone? Anyone...

Essentially, we've got another album in the vein of The Age of Mastery or The Fourth Judgment, and though that's no immediate cause for complaint, it seemed a less impressive followup to Thane to the Throne, which had released only a year earlier and sent the band's stock skyward for its solid and able execution. I will go so far as to claim that Mechanized Warfare features some of the band's best, modern 'power metal' atmosphere. There are some tight tracks to be had in its mobilized depths, and the same consistent lineup ensures that the writing is fluent and consistent with past efforts. The leads here are developed quite nicely from even their 2001 audio documentary on the MacBeth tragedy, though I feel Conklin has had better days. He performs without any hangup or hesitation, but the mere selection of his lines does not feel quite up to snuff.

For this reason, a lot of the tracks arrive with little fanfare, well-executed exercises in pure USPM glossed in studio clarity that simply don't leave a lasting impression, like the bombastic melody of "Frozen in Fear" or the sailing of "The Silent" with its great solo. Nathaniel Hawthorne is given a nod in "The Scarlet Letter", a fairly interesting piece with a fine curve of melodic, muted expression that the band has developed so wonderfully in their reunion material. "Choir of Tears" is one of the most climactic pieces here, with charging mid-paced melodies that twist through the lattice of Conklin's steady narration. I'd offer that the album improves as it proceeds, with "Cold is the Blade (And the Heart that Wields It)", "Hidden in My Eyes" and "Power Surge" among the best three-hit combos the band have ever laid out in the studio, but I'd also consider "Take to the Sky", the only real proof of concept of my fantasies over the cover art, one of the best pieces on the album, and that's the very first track.

The only tracks I don't care for would be "Unworthy", which starts with some chanting but devolves into an average piece with only a sole welcome melody, and the closing power ballad "All Things Renewed", which is essentially Jag Panzer gone Queen, but offers nothing else of interest aside from the choir vocals and touch of orchestration (similar to 21st century Blind Guardian's usage). Of course, this is a band now quite removed from their 80s roots, and even the very brightest stars burning on Mechanized Warfare pale in comparison to the primal inspiration the band evolved out of. The end result is an album which is competent, and fitting the status quo of their productivity streak from 1997-2004, but not all that gripping or memorable compared to better years. And for fuck's sake, do not put a giant robot on the cover of your album without following through?! A thousand years of nerd rage will now descend upon you like napalm rain!