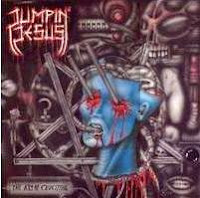 The years have been kind to the German death metal scene, and you'll find a large number of bands treading this path in the past decade. Back in 1991, it was an entirely different story. You had a few acts beginning to establish themselves like Atrocity and Morgoth, and a few condemned forever to obscurity like Lemming Project, Incubator and Immortalis. Then there was the ill named Jumpin' Jesus, an anomaly who exploded out of nowhere, into nowhere, leaving us with just this one full-length effort of technical and chaotic death cultivating an influence from both the Florida pioneers Death, Atheist and Morbid Angel, with a wafer of technical European thrash ala Mekong Delta, Destruction or old Pestilence.

The Art of Crucifying was a fairly ambitious, if not wholly original debut for its time, and though the seemingly silly moniker and artwork (which I honestly don't mind) might have turned some off, there can be little doubt that further exposure of their music to the brooding and multiplying hordes of US and European death metal fans would have surely resulted in a promising career, since they were every bit the band that their countrymen Atrocity or Morgoth were at the time, and I'd even grant them the edge in such a comparison, due to their technical prowess. Jumpin' Jesus were hardly shredders or self-indulgent twats, but their compositions tend to shift through a myriad of tempos, leads serving as atmospheric breaks. The mix of the record is typical for its day, with an ominous cadence thanks to the clinical thrashing guitar breaks and Miro Pavelic's grunting, which one might compare to a neanderthal with an ulcer making his disdain known before the daily hunt.

I found it interesting that the album suffers from somewhat of a rift in between its faster and slower material. The band occasionally incorporates sluggish, concrete grooves into the material which were not unpleasant or uncommon, but also not very interesting here. In contrast, the more acceleration they evoke in the riffs, the better the note selections seem to become. Take, for example, the interestingly titled "Thru In4cers I's", which opens with all the calamity of an early Morbid Angel or Vader track, with a number of curious riffs and morbid, spry leads and tech death/thrash rhythms circa Pestilence's Mallevs Maleficarvm, but then opts into a fairly blunt and boring mosh riff after 2:30. This is brief, and thankfully it happens only a few times on the entire record, but leaves the impression that the compositions might have only benefited from just a little more gestation during the writing process.

Nonetheless, the vast majority of the tracks here slay. "Burnt Offerings" segues from a creepy intro into a violent burst of technical thrash, storming leads and a savage, higher pitched vocal style which frankly is phenomenal and far more effective than the gutturals. At the very least, it should have been used more often. "Rotten Flesh" is another riffing monstrosity, with a grind core reminiscent of Repulsion or Napalm Death, proving this band were almost at the Carcass level of fluid, ear-catching morbidity. "Cloning the Future" provides a nearly 8 minute morass of shifting tempos, at times progressive and at times nothing more than a bludgeoning implement. "Braincramps" balances the screamed vocals and grunts over a spastic, virile backdrop, and "Chaingang" has some of the best fast guitars on the entire album, reeking of a German thrash influence ala Destruction or Kreator.

Not all of the tracks here are astounding, or even striking, but taken for what it is, The Art of Crucifying is surely one of the more intense and consistent death metal albums no one ever heard of from the 90s. The lyrics are even fairly well written in English, considering the time frame and the bizarre song titles. The appeal of this could breach a wide range of tastes within this genre, from the unflinchingly old school, to the seasoned death/thrasher, to the more technically inclined metal fan seeking rarities which showed promise beyond their seasons. This is easily one of the bona fide classics of the limited German scene as death metal was starting to transform the landscape elsewhere from cheery to gore soaked, and well worth any sick bastard's time to track down.