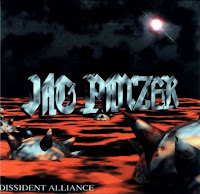 When you've taken the plunge from a sultry and (presumably) attractive metal raven carving up a band in a blown out urban space or leading the Four Horsemen of the Apocalypse, to a computer generated minefield floating in lava from the dawn of terrible 3D graphics generation, there is clearly something amiss with your career. Dissident Alliance is another of those laughable 90s mistakes in which a traditional metal band would reach far from their modus operandi into new territory, an attempt to 'branch out' or run with the times that would ultimately pan out as one of the most awkward in the USPM realm, at the very least, and one wonders exactly where and how the decade between the excellent Ample Destruction and this atrocity was spent...

After their debut EP and album in '83-'84, the band did actually record a more natural follow-up, the ill fated Chain of Command, in '87. However, it was not actually released until 2004, when the band were already well into their comeback phase and held some tout. In the intervening 80s, the band produced a few demos which would also avoid exposure, after which they vanished for very near a decade. Jag Panzer would return in 1994 with an official sophomore effort through Pavement Music and a new lineup, with Rikard Stjernquist replacing Hilyard, Chris Kostka replacing guitar icon Joey Taffola, and most disturbingly, Daniel J. Conca, a virtual unknown replacing the legendary Harry Conklin in the vocal booth. Conca had spent some time with the East Coast thrash band Gothic Slam, but did not appear on either of their albums, so one can hardly cite him as lacking any experience, but he was simply incapable of stepping into such brilliant shoes, and his deep, crude thrash vocal approach is one of the primary reasons this album is such a stinking, fecal mass.

But there's a bigger reason, and that is that the remaining original band members (Mark Briody and John Tetley) had lost their fucking minds! Dissident Alliance is essentially a poor excuse for a thrash album, with only faint traces of the traditional power metal virtues that dominated their prior output. Yet this is not simply content to be a poorly written thrash record with moron riffs you could catch from any random neighborhood band, in any random bar on a Friday evening during the early 90s fallout of this beloved genre, the offenders blissfully unaware that they were well past 'on the way out', doing nothing of note or value to reverse this dire fortune. What's more, Dissident Alliance is not simply CONTENT with this fate. No, it attempts to screw around with other musical genres like alternative hippie rock and tribal blues ("Forsaken Child") or moody progressive rock (the intro to "Spirit Suicide"). Shockingly, these actually prove to be some of the better moments of the disc, because at least they're not as annoying as the shoddy thrash that dominates so much of the bloated, nearly 60 minute length.

The first mistake is that the album shoves some of its less idiotic metal numbers into the aft positions. "GMV 407" has a few genuine seconds of classic Panzer wound about its thrashing heart, spikes of melodic force breaking through the crust of dull earth before the solo, though here the Taffola presence is clearly noticed since the lead blows. With Harry Conklin at the helm, "The Church" might have turned out a reasonable offering: the riffs are hardly inspiring, but it carries forward that cruel certainty of the previous releases, and the simple, crisp melodic surge in the bridge is not offensive. "Whisper God" is burdened by a lame verse with a bluesy, soon forgotten swagger, but the first :15 seconds showed potential. I mentioned "Spirit Suicide" already, which opens with melancholic acoustics, sparse percussion and slowly swelling synthesizers. But the most striking anomaly is that Conca provides his most elegant and worthy vocal lines on the entire album here, and continues to carry on throughout the track. Why couldn't this side of the man be spread throughout the album? Who would have known?

Now, before I sent mixed signals, let me establish that none of this later material is actually worth slogging through the album's early contents to arrive at, but it shows that the record, while tragic and terrible, does level itself out, find a groove and expose that the band were still capable of ideas that did not entirely suck. Unfortunately, we've got to get there first, wading through embarrassing stomp/thrash like "Jeffrey/Behind the Gate", full of horrible nu-groove thrash rhythms that even your local Pantera wannabes from 1994 would scoff at. "The Clown" teases with a slightly acceptable power/thrashing, until the verse arrives and Conca stumbles over himself with horrid, almost rapped lyrics that lead into the nasal chorus:

"Forsaken Child" follows, perhaps the strangest piece here, all driving acoustic guitars, tribal drumming, and it evokes memories of university drum circles strung out on angel dust and folk records, with a rock structure to the guitars. Without vocals, this might have actually sufficed as as a decent piece of music, but as soon as Conca starts whispering all 'sexy' like or putting the same emotion in his voice that later functions well within "Spirit Suicide", it becomes very hard to take seriously. The stylistic deviance is not at fault, but it stands out here like some failed experiment to explore the band's alternative influences, and when the down-tuned vocals hail the entrance of "Edge of Blindness", a weak and repetitive mid-paced thrasher, the album has already become too much to bear. "Eve of Penance" throws away a promising intro with a weak, charging thrash tempo, and "Last Dying Breath" sounds like John Bush-era Anthrax with a bit more sneer to it, and lyrics like:

You might have noticed that this record came as quite the shock to a fan of the band's original lineup. It's not completely devoid of value, and will surprise you on the rare occasion that a riff still stands out, or Conca steps above himself and delivers a few acrid lines. Perhaps with some further vocal direction, he might have been a good thrash or death metal singer, as there is suitable vitriol when he reaches into the lower, 'smoker' range, but even if he was Rob fucking Halford on this record, it would not have saved the abysmal, uninspired compositions that dominate so much of its time in the stereo. Dissidence Alliance is clearly produced, with some extra fuzz to the guitars, but the drums feel inadequate and the few leads poorly integrated and mixed alongside the backdrop.

In the end, its another example of how the 90s were 'death' for most traditional metal bands, unless you knew exactly where to look. No wonder the more extreme metal genres flourished so in these bleak years; those of us who were worshipers of the edgier 80s material had our expectations flogged to incurable, and needed a fix of brutality to floss out the stains of an album like Dissident Alliance. Like many others, Jag Panzer took a chance and simply bet on the wrong color, when there was really nothing wrong with the band to begin. They would come to their senses just a few years after this, returning Conklin and Tafolla to the lineup and inking a deal with Century Media that would stoke the most productive phase of their career, but as they say, the stain remains.