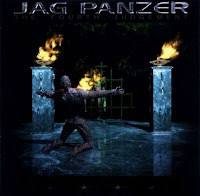 While Jag Panzer's 1994 distinct failure Dissident Alliance was a positive reinforcement of both our civilization's need for the profession of psychological counsel and large, ample supplies of booze available over counters everywhere, the band would not dwell on this ill conceived and dourly received effort for a long period of time, hashing out any delusions that they could proceed down the path of bad thrash and bringing the 'Tyrant' and Joey Tafolla back on board for The Fourth Judgment, the band's first album in a deal they inked with Century Media, who were truly gaining ground as one of the world's premiere metal labels by this point (well before the singing spree of trendy commercial fashion-core and metal bands).

This was rather a surprise, because power metal in the 90s had long been dominated by the Europeans, and it was really time for the US bands to start kicking it back into gear. This was not an immensely popular genre at the time, and considering the Colorado band's recent audio vomit, one can only assume this was due to the return of Conklin and reversion to the style of their 1984 classic, Ample Destruction, which still held considerable weight in the underground. The Fourth Judgment is not exactly what the doctor ordered, nor is it quite so memorable as that legendary cult effort, but its a step in the right direction, Jag Panzer with an added level of melody and maturity manifest largely through Tafolla's even further increased ability. Harry is not so wild as his early years, but his time in Titan Force has refined his voice into a crisp, professional weapon, still capable of launching into shrieking heights. Briody and Jon Tetley both seem to be back where they belong, and they've even kept on Rikard Stjernquist, who sounds more alive behind his sticks than on his unfortunate debut with the band.

"Black" sets the stage early with a surging string section that parts for spacey ambient synths and Tyrant's introduction which soon turns to churning, melodic mid-paced metal, a balance of angrier chords and fragile guitar patterns that beautifully set up the best leads the band had conceived since 1984. "Call of the Wild" sounds like an outtake from the Ample Destruction years given youth by the cleaner production standards, wailing vocals and ominous backing vocals, one of the more memorable tracks from this effort. "Despair' uses some twangy bent melodies to create an eerie effect not unlike King Diamond, stilted chords in the verse hammered out percussively before launching into the elevating chorus. "Future Shock" benefits from a good vocal performance, a touch of background synthesizers and another fine chorus and lead sequence, while "Recompense" fires up a thick NWOBHM influence with a cruising, bruising riff not unlike Saxon that cedes into spry, melodic grace. It might also be relevant here to note the band's lyrical improvements, as per "Future Shock":

Overlapping textures of pain
Nightmares race through information veins
Who claims what's wrong, who controls what's right and who cares anyway
The information highway will take you there for such a small price to pay

Deeper into the track list, there is no death in quality, as "Ready to Strike" and "Tyranny" provide another pair of titanic, melodic hymns which embrace the very best of both classic USPM and their European counterparts. I particularly enjoy the winding bass in the later verse of "Tyranny", with yet another beautiful Tafolla lead (it goes without saying that this man is a truly excellent match for this band). "Shadow Thief" is a piece that the band had originally written for several of their 80s demos post-Ample Destruction, and at long last it's given a golden makeover, a Maiden-like madness running through its bristling melodic thickets of sharpened steel leaves. "Sonnet of Sorrow" is an attractive if clunky acoustic interlude with Conklin dueling himself and some gorgeous violins, and "Judgement Day" follows suit with further acoustics that transform into a roiling, pompous metal beast with huge chords and angelic vocals, some of the best on the entire album.

With the exception of "Call of the Wild", there is not a lot of the wild, youthful abandon that we so loved on Ample Destruction, and yet this effort is truly elegant and mature, marking the band's turn towards ambitious concept albums and power metal narrative in later attempts. This is not a perfect record, and though many of its tracks are pleasant, most are forgettable within a short span of time, but there's nothing awkward or bad about it and its uncountable miles beyond the atrocity that was Dissident Alliance, a welcome return and a mirror into what the band might have become in that intermittent space between periods of undeniable inspiration.