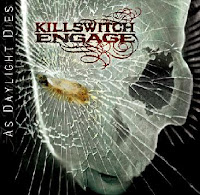 When I first skimmed through the opening tracks of As Daylight Dies, I thought some major change had come over Killswitch Engage, like they had decided to shift back in time to their earlier years and make everything all the more crunchy and aggressive. Sadly, that is not the case for the entire album, and a few of the tracks sound extremely familiar to the Gothenburg-meets-groove gone emo that dominated the previous record The End of Heartbreak, so I still had to arm myself with both a bucket for bile and a box of tissues for the tears I would inevitably weep as I journeyed through this emotional roller coaster of abysmal composition and cheap metalcore thrills.

Racing, melancholic guitar streams tease the listener into thinking this is some real melodic death metal album until about 1:00 into "Daylight Dies", which then devolves into horrendous mosh metal with dull and redundant melodic fills and aimless barking. Of course, Howard Jones' soulful vocals are not far around the corner, and the whole thing collapses into an even more retarded metalcore breakdown with zero musical ambition except to entice the concert slamming of 13 year old girls and the boys who are fighting for their attention (boy are they hellbound on a fast train to disappointment). "This is Absolution" is another sheep in wolf's clothing, starting with a pair of brick house modern thrash riffs for all of 30 seconds before another shoddy groove, culminating into the typical My Chemical Romance/Fallout Boy style emotional lifting chorus with such predictability that I just spit the vodka I was drinking straight out my nose in NON surprise.

The arms race against Avenged Sevenfold to see who become the more castrated metallic doppelganger becomes even more heated when they spike off into "The Arms of Sorrow", a groove based post-hardcore track with a lot more, soaring clean vocals than usual, with enough angst in there that I felt Jonathan Davis of Korn might have been guesting in there, and a lame growling subtext which sounds insanely tacky. "Unbroken" becomes the same old shit all too quickly, a thundering if forgettable nu thrash riff that breaks it down into pit frenzy before you can even sneeze, soul chorus just around the corner, about as substantial as a hummingbird's vapor trail. But things grow steadily worse with "My Curse", a groovy Southern Pantera style slugfest with yet another cheesy emo chorus. It really feels as if they're bottling these songs up on an assembly line of awful, fast feeding them to the masses of tasteless Hot Topic hobbits like Happy Meals.

There is love burning to find you
Will you wait for me?
Will you be here?
Your silence haunts me
But I still hunger for you

I'm not going to waste your time with the rest of the band's originals here, but some special venom should be reserved for the cover of "Holy Diver" which is included in the special edition of this CD. Now, I may not be the biggest Dio fan in the world, rest his spirit, and I tend to stick towards his earlier work with Rainbow or Black Sabbath (Heaven and Hell, Mob Rules), but Killswitch Engage have taken this beloved song with its arguably atrocious lyrics and somehow made it even more corny, by tossing in chug breakdowns and other staples of their gods be damned style to make this their own. Make no mistake, I actually prefer a band to customize a cover song, it generally makes it more interesting to sit through, but when a band is already such shit on a stick as these Massholes & Co., the result is like having an appendix burst within you. You're in for a lot of pain, and it will be days until relief arrives through the proper medication.

I won't deny that, pound for pound, this is a heavier record than the past two, and to some extent I warmed a little of my inner ice to this fact, finding it just a thread less aggravating. However, it's every bit as lame and formulaic, and the bonus of having someone's childhood obsession with a legendary singer raped before my very ears by a terrible metalcore entity is not lost upon me, even if my own strings to that particular song are loose indeed. What I'm saying is that you are a posterchild for masochism, and you DO seek to actually purchase this album, spare yourself perhaps the most lethal and crippling pain and try to find the original CD release with only the originals. You have my word that it will still suck, but you might be able to handle it with over the counter medication rather than foot an ambulance bill to boot.