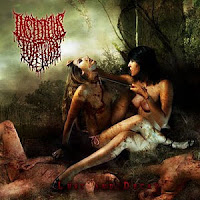 When it comes to the satiation of carnal delights and shock imports, one need turn no further than the local death metal section at your specialty record shop and flip through the covers. One that might suit your unbelieving eye and gasping pulse would be the debut EP from Australia's Insidious Torture, a 16 minute neckbreaking dialogue seeing release through the prolific and entertaining Sevared Records. Attention spans having been firmly 'grasped' by this atrocity, we now turn to the music, which is predictably an outburst of brutal death with some technical and grind elements to ensure that the listener does not quickly descend into boredom.

The three gentlemen (i.e. sick fucks) who comprise the ranks of this libertine slaughterhouse are not exactly strangers to the crimes of taste they commit, all having worked together in the band Terrorust a few years back. In fact, Insidious Torture IS Terrorust with a change of name, and before that, the band were known as Damaged, having put out a few full lengths in the 90s that met with a small international buzz. Stylistically, Lust and Decay is not a far cry from a few hundred faceless brutal USDM acts, falling somewhere between the realms of slam heavy mayhem and crazed Californian carnage being wrought in recent years, though it is more likely that the veterans here were more directly influenced by original serial killers like Suffocation, Morbid Angel, Cannibal Corpse, Sinister, Deicide and their ilk. Still, this release is bleeding out into a market obsessive over acts like Devourment, Defeated Sanity, Skinless, Lividity, and the like, so Insidious Torture are quite primed for some attention here.

Unfortunately, like so many of these peers, the Australian trio is very long on hostility but short on composing durable and memorable tracks. "Mutual Erotic Asphyxiation" arrives in a storm of sadistic, crashing and colliding rhythms, thick with chugging, guttural and snarled vocals, and an enormous breakdown around 1:30 in, but aside from keep the mind occupied with the vortex of necrosexual carrion, perhaps evoking a smile or two, it disappears without a trace into oblivion. "Dead Trees" quickly ventures to that safe destination, though "Orgia Vehemens" features some fine pummeling, mid paced rhythms and bloodied, mocking guitar lines like a ghastly salad dressing over the bridge before the grinding and snarling heart of the track explodes. "Maternal Neoplastic Bond" enjoys some ascending, Middle Eastern scales below the punishing morass of its vocals, but in truth the closing "Insect Lust" is the most spastic and likewise interesting piece on the EP, awash in extreme technicality, flurries of menace and unforgiving structure.

I was not fully enamored with the EP, but as an introduction to a band who are well past crossing the threshold of punishment, it serves as an ample warning. 2-3 of the tracks were thrilling enough that I'd be open to hearing a full-length effort, and all of the material here is solid enough for its style that we can have no doubt one such murder-slab will be forthcoming. Most of us have heard hundreds of such brutal, extreme death metal acts, but even among these, the excitement this band feels for their composition is obvious, like a serial butcher very proud of his latest work, wanting to share it with an under-appreciative audience of law enforcement agents and the families of the victims. Headaches and nightmares aside, I have no doubt we'll be hearing from Insidious Torture in the near future. With a slight shift in focus towards better note patterns that both fit the band's exhausting initiative and stand to memory, they could very well become a keeper.