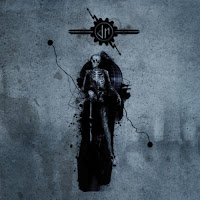 I'm a sucker for an interesting, minimal, eye-catching cover image, and the Dunkelnacht debut caught my attention largely for its skeleton against black ichor, below an interesting interpretation of logo. Though this is the debut for the French band, they have been kicking around for some years now with several demos and a number of splits with other severe underground elements, including some of the other projects of the band's own lineup. They've seen a number of shifts in status through their five year existence, most recently acquiring the snarler Déhà from a number of Belgian projects that most have simply not heard of.

I mentioned the cover because it gave me some hope that the band's music would offer an aspect of experimentation which I enjoy in countrymen Deathspell Omega, Reverence or Blut Aus Nord, but in truth, Dunkelnacht play it pretty straight to the hilt, with a vicious assault of streaming, screaming chords and vocals that have no interest in taking prisoners or innovating anything but the means to dispose of your corpse. The drum programming is nigh on relentless, the guitars ripping through predictable if grisly patterns and the vocals ranging from deeper death grunts to tearing black screeches that sound like Dani Filth being strangled by Attila Csihar. They tend to move at extreme speeds, as in "Oligarchisme", "Etau Chrétien" and the majority of "The Nailed Wings of Zionism", complete with leads and brief chances to gather your breath before the next cloud of choking acid is upon you.

The band is not above an incorporation of mood and atmosphere when it suits them, and this in fact provides most of the better moments of the album, like the dark ambient intro "Des Dieux Et Des Martyrs" or what I believe to be the greatest achievement on this album: "How to Build A New Burning Head Messiah". I love the sampled female narration in French as the guitars blaze across and the scorched Earth policy of the screaming melodic black guitar lines in the bridge. Other cuts like "Errare Humanum Est" and the extremely brutal "Klaustrophobik Inoculum" will certainly bowl your head off its shoulders, but aside from the blasting and screaming there is not much musical depth to latch upon, aside from the bizarre bass grooves in the breakdown of the latter.

Atheist Dezekration is certainly not for the lightweight. This band is as fast and treacherous as a volley of razor sharp spears of ice hurled through the ice, sticking you limb for limb with cold and inevitable loss of consciousness and life. A number of the tracks have already appears years ago on splits, so its possibility that what we're hearing with this full-length debut is not where the band are currently positioned musically, and I really only say this because I found some of the material forgettable. On the other hand, when the band breaks the mold, even slightly, as in "How to Build a New Burning Head Messiah", they seem like they could have so much more to offer, so let's hope the next effort with further indulge into the less tried and true and summon forth caustic, artful euphoria that can thrill beyond merely the speedometer.