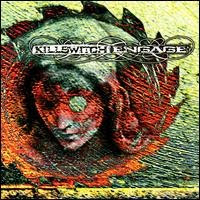 Many are the blights which have impacted our beloved corner of the musical spectrum, from the glam metal craze of the 80s to the shite alterna-metal, nu-metal, fairygoth metal and of course the raging monolith of suck that would become 'popularized' metalcore. But in this final, fetid category, I feel it's important to first examine the roots of how such a thing like Killswitch Engage came to be. Simply put, the subject fascinates me, because as a Massachusetts native myself, I spent much of the early 90s, the era in which local acts Converge and Cave In were still fresh scents on the air, performing in a handful bands that strove to deliver a similar mix of ingredients to what this upstart perpetuates on the impressionable and foolhardy among us.

Not all metalcore is an attempt to sate a mainstream audience by peppering them with tongue in cheek aggression and the transparent emotions of a high school teen in turmoil, as evidenced by some of the names I have already dropped. This was once a new edge of expression, an expanse of the hardcore and metal spectra that sought to either artistically and/or replace the straight edge or political motivations of early hardcore and punk with a more personal spin on the angst of love, friendship, betrayal, and trying to carve out a path in the adolescent nightmare of American life. Many bands were already doing this very blend by the early 90s, whether you were calling them 'crossover' or even 'metalcore', a term that already existed prior to the New England (and beyond) explosion of the early 21st century.

Yes, you will hear many crediting bands like Killswitch Engage, All That Remains and Avenged Sevenfold for what we today refer to as 'metalcore', but this is simply not the truth, and anyone who tells you otherwise is either a downright liar, or your average internet historian. These are all bands who simply added a spin on an existing formula: the influence of Swedish melodic death metal elements into the preconceived mix of Hatebreed/Biohazard/Reign in Blood mosh worship and godawful emo/pop-punk angst. Such was the impact of a Jester Race or Slaughter of the Soul, that an ocean away, a bunch of trendy metalcore kids were soon on the welcome wagon, injecting this guitar-driven mayhem into their dimwit pit anthems so they could expand their audience beyond just the local weekend mosh crew.

Now, the roster of Killswitch Engage back in these days were not newcomers to this blend of musical influence. Several hailed from Overcast, a promising local group who were one of the first around here to reap some success out of their metallic and hardcore influences. Others came from Aftershock, a little known act that nevertheless had friends in the other band. Singer Jesse Leach was in a band called Corrin who were themselves around for a few years, making waves locally but not yet with the international potential of Overcast. A number of these bands fell apart, and the members culled their various skills into what would become the ultimate voice of angst and aggression, a spark to fill in the void of the hundreds and thousands of dispossessed vacuum headed youths who had conveniently ignored the wealth of talented, 'purist' metal genres for well over a decade, in favor of their pop punk and groovy nu-metal excremental education at the hands of Sharon Osbourne.

In short, Killswitch Engage sucks. They've sucked from the beginning, and grown increasingly worse as the years have rolled on, ever in their favor. It's not necessarily an issue of musical adequacy. They can each play their respective instruments, and they can perform with all the jump da fuc up passion of the 90s hardcore and metalcore scene. The problem is that they write such disposable and predictable hymns of mediocrity that I'm stunned by the success. They represent all the cheap ploys of a band starved for attention, in abundance and in your face! Awful, derivative grooves that had been written by hundreds bands already, with not a single unexpected twist or turn. Bland melodeath/thrash rock out rhythms which never once affix the imagination like a Dark Tranquillity or At the Gates, never once cling to the inner ear and demand your repeated affections. Lyrics that are as vapid and pedestrian that I'm surprised they weren't penned by Papa Roach. I can even remembering seeing a few of the band's earliest shows, back when they were one of the 'house bands' at the Worcester Palladium (which was, of course, a critical component of their success, as well as a few other locals like All That Remains and Shadows Fall) having heard so much about them and then being completely underwhelmed by the music.

Killswitch Engage was their s/t 2000 debut album, the one release through hardcore stalwart Ferret Records before being snapped up by the once glorious Roadrunner, which had by this point dissolved into a viscous nu-metal cesspool. Though the name of the band was even better than the music itself even in those twilight years in which the band briefly flirted with 'underground' status, this is still the best they've released. Oh, don't mistake such an admission for apologist sentiment: this record is incredibly weak, with almost 32 minutes of mundane and forgettable melodic mosh core with as much substance as your last Listerine mouthwash session, but the rather crude affectations make it all the more charming when viewed in retrospect. The one exception, ironically, is the closing instrumental "One Last Sunset", written by Adam Dutkiewicz, who performed the drums and guitars for the album. Its a moody, almost theatrical score piece which bears no resemblance to the rest of the album, even when the metallic guitars surge forth around the midway point.

Otherwise, be prepared for an onslaught of middling metalcore which shows arguably the least amount of Swedish influence in the band's career. You've got mid paced angst rockers like "Temples from the Within" which are built ground up to get the blood of the tattooed, earlobe stretched 'fratboys of metalcore' in a frenzy as they careen about their vulgar displays of manly power. Strings of melody crash and collapse through the mix, the bass is loud and proud, and you can bet the band will continue to lapse into a moshing juggernaut, only without a single segment of viable anger or menace that was the hallmark of so many, superior hardcore bands. This is not Sheer fucking Terror here, people. This is hostility for metrosexuals on a bad hair day, or some coked up gimme gimme broad who had a bad day at the modeling agency. Sadly, it doesn't get much better than this throughout the album, even when "Vide Infra" lashes out with a true old school hardcore riff that morphs into an ascending, Cannibal Corpse-like structure (the best 10 seconds on the album, yet even this is astoundingly weak).

In fact, part of the problem with Killswitch Engage is that it is simply too unfocused, trying to cram everything possible from just about every influence these guys were riding on into a single set of songs. You'll heard a little death, a little thrash, hardcore, death, melodic death, scattered through "Rusted Embrace" and "Soilborn" like a pack of crack whores chasing ten dollar bills on the wind. Through it all, Leach's vocals shift between Tomas Lindberg barks and emotionally charged, Linkin Park/Fear Factory mallcore angst, death and black grunts, succeeding only when he sticks with one long enough to count (for example the stretch at about 2:40-2:50 in "Soilborn" where it becomes almost pure blackened melodeath). As for the lyrical content, prepare to bleed out your eyes and ears with after school special, politically correct, suburban discontent of phoned in hardcore like:

You could break out any dozen efforts at random from your stack of CDs and 7" from hardcore, metalcore, punk and angrier emo bands and choose lines at random. They are probably found on this album, word for word. It's not all a complete bust, as there are several lines in "Rusted Embrace" and the wrist-cutting "In the Unblind" which don't completely make one desire to barf immediately into the latest porcelain fixture or nearest human being's lap, but the majority of the verses and chorus parts are simply without much effort, an afterthought to place over the listless, slovenly music that I had forgotten before I even pressed the 'stop' on the CD player.

As hard as I try, finding something to praise about this band is as difficult trying to find a dead celebrity out of urban legend living in your closet on a diet of stale popcorn and knockoff Mountain Dew. Elvis is really dead, people, and so is the future of 'extreme' music if tripe like this continues to clog and corrode the arteries of culture and consumerism. Everything about this album is signed, sealed, safe, and delivered, and this is the heaviest and most street credible record the band have ever produced. The mix isn't bad, and the instrumental "One Last Sunset" can be excused since it is something that naturally wouldn't belong here if the band wasn't trying to fill up space, but the music shoots through the metabolism and out the attention span's arse faster than the latest episode of The Hills.

Yes, this is metalcore music for people who watch The Hills.

Verdict: Fail [2.25/10] (we must teach forgiveness and compassion for all life!)