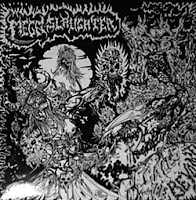 Swedish death metal is a fascinating territory to explore, for not only do you have the multitudes of 21st century wannabes riding the train, many of whom are surprisingly adept at aping their idols with the same level of menace and atmosphere, but you've also got the wealth of bands that arrived in the original generation, but never got much attention. There was already an Entombed, a Dismember, a Grave, an Unleashed...so who in their right mind would have needed a Mega Slaughter to boot? Well, as it turns out, there are those of us out there who constantly seek more of what the Swedish bands were giving us, a darker and meatier alternative to much of the early Florida scene that was rapidly giving way to the faceless, brutal tech gore porn hordes of the mid 90s.

From what I've already tossed out there, you can gather what this band Mega Slaughter sounds like. They use the thick, bludgeoning Swedish tones of Carnage, Dismember, and Entombed, not only in the actual distortion but the weight given to the huge chords. After a demo, they were signed by the small time label Thrash Records who released some other, similar groups like Epitaph, and Calls from the Beyond shows this young group peaking often, a worthwhile investment of time and energy for the rabid fan of this particular strain. Perhaps the barking grunts of Jens Johansson don't offer the same personality as a Matti Kärki or L-G Petrov, and perhaps even by 1991 the riffing does not feel so original, drawing more heavily from the US forebears than many of the other obscure Swedish hopefuls like Gorement and not always ripping along like a Left Hand Path or Indecent & Obscene. But in the end, there is a stark and primordial feel to the band's riffs which, coupled with the atmosphere and leads, truly delivers.

"Shreds Left Behind" seems a prime example, a mid-paced shuffle of wretched, rotting flesh guitars that draw on old Death and Carcass to produce morbidity. "Into the Decay" channels the warlike, tank treads of Bolt Thrower into a grinding hostility. "False Paradise" which features a riff eerily similar to one found in Pestilence's godly "Echoes of Death", but also some great intro guitars and scathing before the thrashing finale. "Death Remains" leads off with bells and horror before a series of shambling thick chords and then the festering momentum of an early Entombed/Nihilist track, and "Calls from the Beyond" itself is grisly and warlike, down tuned guitars stomping over double bass before the grooves set in. I doubt any of the band's rhythms took more than a few moments to piece together, but despite their crude barbarity, I would find it hard to stand still in their presence.

Mega Slaughter were of course playing it 'safe', and despite its suitable aural oppression, there is nothing about Calls from the Beyond which eclipses its influences by any stretch. This was simply a band wishing to pool together its influences from both shores of the Atlantic into a palpable, crushing testament. I'm not sure how much appeal the record might have had outside of the European death metal fan, and since the album was barely promoted, it never ended up mattering. Another demo was produced, but the band would not survive much longer, another victim of disinterest and overcrowding. Today, those seeking out obscure Swedish death acts like some I've mentioned here (Gorement, Epitaph, Uncanny, Interment, Crematory to name a few) will find just as much to like about this as most of the 'retro' bands like Rogga's Paganizer or Ribspreader, so let the exhumation begin.