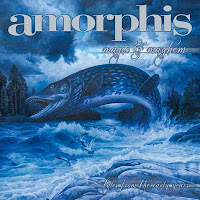 Diving back into the glory years of your band's discography using current personnel and the advances of modern studio software seems to be all the rage these days, but not always a welcome one. Poor examples of the gesture include the recent, pathetic Exodus collection with Rob Dukes singing the classics of the Zetro/Baloff eras, and the more obscure re-release of Bethlehem's S.U.I.Z.I.D. with Niklas Kvarforth's vocals, completely unnecessary and awful. Alas, it appears our beloved Amorphis have now stepped on this train. A genuine celebration of their rich past? A cheap ploy to fetch some coin and foist another package into the marketplace? I'll leave you and the band to come to that decision while I comb over the contents with bemused nostalgia and a gas mask to guard me from the stench of discontent.

There are eleven original cuts hailing from the band's first three records, The Karelian Isthmus, Tales from the Thousand Lakes, and Elegy, in addition to the band's classic cover of the fellow Finnish brutes Abhorrence's "Vulgar Necrolatry", and a last minute cover of The Doors' "Light My Fire". Now, Elegy in particular is one of my favorite metal recordings in history, easily making it onto a 'desert isle' list and in my opinion grossly underestimated despite the praise many of us have hoisted upon its shoulders, but the first two albums follow close behind, as remarkable examples of their era that stood tall above the great metallic hibernation of the 90s. The band have not only re-recorded the songs using their newest front man Tomi Joutsen, but arranged some of the earlier material to jive better with the albums they've been releasing in the past few years, namely Skyforger and Silent Waters. Thus, the further back you go (I'm looking at you, The Karelian Isthmus), the more likely the material is to be altered.

Amorphis are a band that have had a history of strong vocalists, and Joutsen is no example. He possesses the adequate cleans and growls to fill in for his predecessor Pasi, and with him the band have had a resurgence of late, producing some of their best material since the Elegy days. But one can't help but feel that even he is overstretching it on a few of the songs here, and combined with the band's tweaking behind him, there is honestly not a single track found on Magic & Mayhem that can trump its original. They are not difficult on the ear, and in fact this is a far better stab at re-inventing the past than so many other bands have flopped through, but the individual tones and atmospheres of the band's first three albums are lost here as they are merged into some new creative whole subsisting on THIS track order, THIS recording, THIS entity borne from a womb of ages to the iTunes store. Considering that most of the band's back catalog is still readily available, it pains me to think that some deers and does, transfixed to the nearest headlights will snap this album up as dogma, robbing themselves of those finer, early recordings.

At any rate, these were all good songs when they originally poked their craniums through the uterine lining, and they remain good songs, even with a few new cards in the deck. From The Karelian Isthmus, we are given "Exile of the Sons of Uisliu" and "The Sign from the North Side", so it's arguably under-represented, and that is a pity. In all honesty, these tracks needed the most 'updating' to meet the band's 21st century material, so one wonder why they didn't just perform this autopsy on all of that 1992 album and leave the rest alone. I say this because, while tweaked, the tracks from Tales from the Thousand Lakes and Elegy don't sound different enough to warrant their metamorphosis from blissful chrysalis to angelic risks. From the first of those albums, the band has included quite a number of excavations: "Into Hiding", "Black Winter Day", "Drowned Maid", "The Castaway" and of course the compilation's title track "Magic and Mayhem".

All of these pieces still sound fairly tasteful, their primary differences coming in the added layers of ambiance that Santeri Kaillo's keys lend to the guitar lines, and Joutsen's broader vocals. The problem is that the original had such a cryptal darkness it channeled through its compositions that meshed so well with its struggling but hopeful production standards, that these cannot properly represent its initial charms. Imagine going to your local coffee hole and requesting a particular blend of dark coffee, then being told their machines are down except the one that can make you a triple-nut frothing marshmallow malt-accino? You take the new drink, suck it down and gain at least a dozen pounds, but your buds still long for the dark, smooth texture that you walked through that door to arrive at. This is the ultimate downfall of the Magic and Mayhem compilation. It's shiny and well produced, loaded with whipped cream and nutty, enticing flavors, but there is simply no reason to spin it when you can spin the genuine article and revel in the morbid tales of myth and drowned hope.

In the case of the Elegy entries "On Rich and Poor", "Against Widows", "Song of the Troubled One" and "My Kantele", the differences are so minimal between the originals and the newer versions that they merely sound like slightly shuffled live adaptations. In fact, had this album actually been a live double record with Joutsen fronting the older material, it might have been more understandable and welcome. These four tracks are all quite perfect in their original incarnations, "My Kantele" struggling behind the rest by a fraction of a fraction, and nothing Joutsen or the band has done here propels them beyond the originals with Koskinen and Koivusaari handling the vocals. On the other hand, I really did not mind the updated cover of "Vulgar Necrolatry" whatsoever. It too lacks the dark morbidity of the earlier release on the Privilege of Evil EP, but it sounds wonderful to have such an obscure Finnish gem brought into this new world of lights and sound. "Light My Fire" sounds pretty campy, more so than the original, with growls replacing Jim Morrison's brilliant lines and an attempt at creating a more haunted atmosphere during the verse, as if this were more about a haunted house than an invitation to some cutie pie to unzip and do the nasty.

To sum this up: Magic & Mayhem, Tales from the Early Years is not necessarily a poorly contrived compilation, though contrived it is. There is no impetus to hearken upon these well trodden paths any more than there exists a compulsion to ford the rivers of time and break out the timeless, flawless tones of the original Elegy, or the nearly perfect Tales from the Thousand Lakes, or the exceptional debut album The Karelian Isthmus. These are legend. They are manifest, and they forever shine from the shadows of the overarching genre's structural rubble, the 90s. Their consumption is vastly more recommended than a spin at Magic & Mayhem, but otherwise I do not have anything to complain about. This is not the case of a band soiling their past themselves as Bay Area thrashers Exodus did with Rob Dukes on Let There Be Blood. Tomi Joutsen is a good singer for this band, and he covers the older material well enough. The effort here is consistent, at least, and the worst that could be said is that it would be like choosing Arbor Mist over some early 20th century vintage: tasty enough for the ladies, probably tasty enough for the men if they'd get over themselves, but lacking the definition.