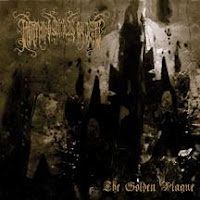 Aesthetically, The Golden Plague is a pleasing release, both visually and aurally. A fantastic cover painting and logo married to a grim as fuck production, all the right influences in Bathory, Mayhem and Hellhammer, and raw, blood curdling vocals that spew forth the sewage of Hell without any apologies: these are the characteristics dominating the Lightning Swords of Death debut. A California act having honed its edge through a number of previous incarnations, they recorded one demo under this moniker in 2005 and then had the opportunity to release their debut through BlackMetal.com. But do not unfurl the banners of blasphemous victory quite yet; for though The Golden Plague wears the robe of barbaric, black metal vengeance well, it's entertainment value is sadly limited.

When entering a field such as black metal, which has already seen constant revision and trekked abroad though many palettes of creativity, there are two paths one will really tread. First, you might manage to combine the basic fundamentals of the genre with some abysmal, wretched tone or some sequence of riffing savagery that somehow equals or rivals the forebears. Second, you'll try something really different, keeping only a few of the core aesthetics intact. Lightning Swords of Death took the former path, with a simplistic but bombastic approach that mashes up the same inspiration from death and thrash metal that the mighty Quorthon once strode. If you could package up the first three Bathory records and then transplant them to Los Angeles with a few vitamin tabs of other influences, you would arrive at The Golden Plague.

This is not necessarily a negative, and the band certainly crank up the vicious undercurrent of the music to a level that might not have been possible in the mid 80s. The bass provides a heavily distorted marrow beneath which the drums rape and pillage, the guitars thick and caustic like viral sludge, and the vocals of the Autarch distorted and suitably disgusting. Tracks like "Shores of Twilight" and "Let This Knife Lead You To Us" who the band at their blitzkrieg best, rampant series of powerful if predictable notation that delivers at the very least a sound companion piece to a neckbreaking experiment. These tend towards a middle or slower pace, but the sluggish evil is extremely potent within the ghastly, distant mix. A few of the shorter tracks also deliver, like "Abomination in White" with its huge, nihilistic thrashing grooves. "Loathsome" is an enveloping if forgettable, ominous guitar interlude, while the epic 8 minute closer "Ghost of a Thousand Broken Blades" mixes up tortured, almost silly vocals with slower, plodding thrash rhythms and other dynamic effects.

The Golden Plague is just diabolic enough, just nasty enough to get a passing grade from me. It's not an album I will listen to very often unless I feel the masochistic need to have my ears pierced by uncircumsized, raw black venom. It's not nearly as well produced as its followup The Extra Dimensional Wound, yet I found the songwriting here on the debut subtly superior, the riffs not unfamiliar but somehow more effective and lethal due to the churning discourse. However, both albums are fairly consistent, and while I can't recommend this band to someone who prefers the more accessible or experimental side of the genre, those who seek the blood drained trenches might squeeze some value out of this, while they stare at that horrid and beautiful cover.