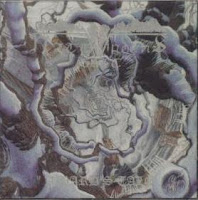 Solistitium was one of those smaller labels which always managed to produce fascinating, if somewhat forgettable acts for the most part, and Nattvindens Gråt ('Cry of the Night Wind') was one such band. Formed as an ancillary entity to the underrated Finnish black metal act Darkwoods My Betrothed, this was a fairly unique take on heavy/doom metal with fantasy-based lyrics and an epic quality evoked through the use of pianos and keyboards, simple but big riffs, and the mix of clean male and female vocals. The roster was essentially a mash up of Wizzard and Darkwoods My Betrothed personnel, including Tapio Wilska on vocals (he'd later join Finntroll) and Tuomas Holopainen on keyboards, who would see huge success with Nightwish.

For some reason, this debut holds sentimental value to me. I picked it up almost completely at random in a specialty shop the year it was released, and took to it immediately. However, even at that point, I could recognize its most potent flaw: Wilska's clean, deep vocals, which sound like a drunken Finnish friar with one too many in the gullet, singing out his woes in a public forum, begging for spare change to fuel his addiction for another evening. Much of this is likely due to his native accent, but there is no denying the comical effect it casts over the record, especially when joined with the more Kermit the Frog, narrative co-vocals (displayed most prominently in the escalating chorus to "Stormwind the Soothsayer"). About the only person I can really compare the majority of the vocals to would be the late Juhani Palomäki on the earlier Yearning records, but he was a lot better and easier to take seriously.

Here, you'll just have to get past them if you wish to feel involved, because they're pretty goofy on the majority of the tracks. The band also uses a session female vocalist on a number of tunes like "The Echo" and the piano interlude "Towards the Sea", but these are actually suitable to the epic travels of the album's titular 'bard' or 'rider', which provide the lyrical backdrop to this story as he shifts through a number of ancient terrains, against the elements. Acoustic guitars are also applied liberally to tracks like the moody, brooding "Song of the Tide Waves", and Holopainen maintains a presence throughout the entire album, with both scintillating progressive pads and clean pianos.

All of this makes for a rather mesmerizing mix when contrasted with the great power of the guitars, carving out granite with huge, classic rhythms and melodies in "Vagabond's Dusk" or "Skyfires Dance", the latter of which reminds me of Swedes Therion or Tiamat around this time, or perhaps the first two records from Lake of Tears. There are more ambitious tracks like the piano driven epic finale "The Two Oaks", bombastic medieval chorus strewn "The Road Goes Ever On" or the spacious, highly atmospheric tones of "A Lonely October Night", but in all, the album flows rather smoothly through both its calms and aggressive spurts. It does work best when Wilska somehow pulls himself together, as in "The Echo" where he sounds most like the earlier mentioned Yearning, back and forth against the ethereal female vox, but this is sadly not always the case.

By now, A Bard's Tale is but a footnote, and Nattvindens Gråt are a long lost obscurity who are probably rarely listened to outside those few brave souls wishing to explore the backlog of its Nightwish and Finntroll alumni. But for some reason, there is a subtle charm to the album, and its very possible that anyone fond of the mid 90s material from other band's I've name dropped in this review would get something from it. The production is straightforward but wonderful, capturing the potency of the guitars in full and casting some archaic gloom over the compositions, and it's completely listenable today. The only thing holding it back from further praise would be Wilska (who would improve drastically over the years). Once that barrier is crossed, the album becomes rather memorable.