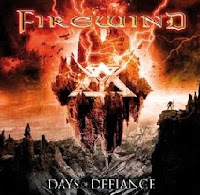 The premiere voice of Greek power metal returns with Days of Defiance, the sixth full-length offering from Firewind, and the band continues to reap the whirlwind they started riding with the last album. The Premonition was a superb collection of rocking tunes and the best balanced and most memorable of the band's studio efforts, destroying elder siblings like Allegiance and Burning Earth with ease. A nuclear facelift, a carefully threaded conglomeration of Gus G's endless riffing reservoir and Apollo Papathanasio's vocal prowess, with the experienced backing of keyboardist Bob Katsionis and bassist Petros Christodoylidis, that 2008 album heralded that Firewind was no longer in contention, but now a force to be reckoned with on the European scene, giving and getting on the same level as their many German, Italian and Swedish counterparts.

Days of Defiance casts no illusions about its true nature: raging melodic power metal that picks up the ashes from the last album and scatters them to the four corners of the globe with "The Ark of Lies", Papathanasio exploding from the speakers with a measured potency that would have Jorn Lande and Joacim Cans toasting their glasses in mutual admiration, while the guitars serving as support lines, throttling into melodic volcanoes as the chorus scours the listener with melodic fervor. "World in Fire" capitalizes on the forward push with pure Germanic power metal ala Rage or U.D.O., a fine power/thrash riff thrown into the bridge about 2:30 which gives the impression that this might be Firewind's personal Painkiller. "Chariot" trades in a fraction of impact for a deeper mood, and I enjoyed the exchange of synthesizers, vocals and guitars as they wound their way to the best chorus yet on the album.

It goes on like this for over 54 minutes, with 13 cuts of varying intensity, from the plucky prog keyboards that christen "Embrace the Sun" to the melodic thrust of the finale "When All is Said and Done". As might be expected of a European power metal album, there is the presence of the power ballad ("Broken"), but as it's decent we can't really hold it against them, and the lion's share of the material is pretty good, in particular "Heading for the Dawn", "SKG" and "The Yearning", the last of which just blows you over with an all out attack of guitars and Katsionis' atmospherics. The performances are all around excellent, including new drummer Michael Ehre, but Apollo really takes the center stage, managing to overpower even Gus G's maniacal levels of talent. Fortunate that it all fuses together so well.

This all being said, I can't say I enjoyed Days of Defiance quite so much as The Premonition. Throughout many of the songs, I felt as if the band were revisiting ground they had already covered, offering just more of the same graces they've committed for over a decade. Very few are striking to the point that they become infectious and rattle around in the skull until you can listen to them again and meet sweet release. Clearly though, this is not for a lack of trying, and this is hands down better than the first four albums, worth its weight to anyone that prefers this brand of flavorful, structurally sound European power that Firewind continue to season with a slight scent of character. If you're beholden to this style, then there are 6-7 blazers well worth experiencing, and on the whole it simply doesn't disappoint.