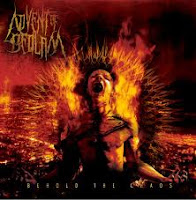 Many have written off the melodic death metal sub-genre for ages, and often for good reason, as there are too few bands coming out that keep themselves within proximity to the style's originators in the 90s, who remembered that crucial 'death' element. Yes, in today's terms, 'melodic death' too commonly means metalcore with uplifting guitar frenzies lifted from In Flames, Dark Tranquillity, or At the Gates. Thankfully, there is some resistance tugging at the line, and Costa Rica's Advent of Bedlam are one such rebel, a band that draws far more largely from a pure death metal influence than the tedious stream of ineffectual noodling and cheap melodies that have stagnated the form at large.

No, you will not find shallow, shitty grooves, pre-pubescent whining or clean radio chorus sequences here on the debut Behold the Chaos (they released two albums under their previous name December's Cold Winter). Instead, we are treated to a rather interesting crossing point between the flighty, energetic death metal of a Hate Eternal, Deicide or Morbid Angel, and the Swedish originators At the Gates. Vocals are shifted between two climactic poles, a gruff death grunt and a more Tomas Lindberg-ian strain of snarling infusion, both crude but effective against the bludgeoning, riff-laden backdrop. Yes, these Costa Ricans write riffs, most of which are at the least effective, if not outright catchy and blazing, and while they're not entirely unique (who the hell is these days), I would take what they've written here any day over the horrid taint of US hacks like Killswitch Engage, Black Dahlia Murder, and All That Remains that have taken a once great style and impregnated it into the shallow emptiness of commercial metalcore.

There are a number of commendable tunes here, like "Awaiting the Chaos", which leads in with a strong, flowing rhythm complete with jazzy, unnerving chords that herald a volatile Swedish matrix of biting, dueling rhythm guitars that dance across Alex Ovares's incessant battery. They pack in quite a few riffs, and even if they're not all memorable, they're proof positive that this band is attempting to actually evolve and squeeze something more out of a stagnant sub-genre. Also of note are the leads, cautiously written to evoke and inspire emotions from the listener, another practice all too rare of late. "Chronicles of a Bedlamite" and "Harp of Ruin" are likewise impressive displays: the former a wall of relentless crushing melodic force rationed out into choppy, aggressive tempos, the latter an acrobatic death/thrashing that surges across some intense double bass work and the evolving mechanism of desperate melodies.

The remainder of the record fares nearly as well, with strong segments incorporated into the bludgeoning "Dogmatic Apprehensions", graceful calamity of "Enlightenment of the Forsaken", exquisitely titled "Alabaster Corpse Consequences" and charging, almost black metal balance in "Vessels of Sin". I did not enjoy every track equally, and felt that a few slacked behind ever so slightly (like "The Stench of Your Faith"), but in all the album is quite consistent in the writing department. From a production standpoint, the album does often feel stiff and boxy, but this is easily ignored when the music is this good, and you can hear all the instruments quite clearly, including the bass and the dual vocal styles. We need more bands like Advent of Bedlam, thirsty and explosive and easily proving that this chosen style is fully capable of delivering some thrills, with the right team behind it to give a little 'push'.