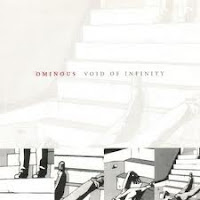 From the unusual aesthetics of its cover image, you might expect that Void of Infinity would be an album that capitalized on the underlying, progressive impulses of its predecessor The Spectral Manifest, but in reality it presents the same general ideas, fleshed out into a more aggressive, coherent package. Where before the band used grooving, chugging elements to augment the melodic death at the heart of their sound, they have here enhanced their complexity. Where the band previously shifted between growled and snarled vocals, here they settle with a style between these two poles, kind of like a Tomas Lindberg who had been punched in the face a few too many times. In fact, there's a lot here that reminds me of At the Gates' album Slaughter of the Soul, if it had been injected with some mechanical plague that forced it to jerk into a number of thrashing grooves beyond those already present.

Despite the increased level of intensity and anguish found on this sophomore, it is sadly not much more memorable or well laid than its predecessor, and the result is an album that misses a great many marks, despite the ribald effort obviously being output. The riffs are tight and thrashing, with punchy cores and scathing tails like you'd find in At the Gates, Dark Tranquillity, or early Soilwork, as heard in "Onerous" or "Blind Without Sight". "Load, Aim, Fire" is perhaps the best thing on this disc, a frenzied mesh of deep, aggressive death/thrash and escalating, slower paced verses, but even here there are simply no riffs that truly captivate the imagination beyond the pummeling presence it creates. Closer "Temptation" is slightly more interesting as far as its construction, rambling through a number of fluid rhythmic thrashing experiments and dense bass lines which fade out to a few minutes of distant, brooding ambiance, but there is just not enough to enthrall the questing ear. Aside from these, the rest of the album slides into the merely passable category, well intended melodic offerings like "Omnipresent III" and "Breath of a New Dawn" worth a riff or two, but soon slipping out of the ears and conscience.

As an improvement to its predecessor, Void of Infinity functions because it feels slightly less scattershot. When the band reaches out faintly on a rhythmic limb here, they are better able to keep their balance, and none of the nine tracks fall out of the tree. I think what they were missing here was in the sheer quality of individual riffs, something no level of general adequacy or competence is going to fix. Most will keep your interest for the first listen or so, but then flush themselves out as they segue into less interesting twists and turns. I can honestly envision a fan of Terminal Spirit Disease or Slaughter of the Soul at least perking up to pay attention, especially one that derives pleasure from devotees like In Thy Dreams, or the earlier records of Soilwork and Darkane, but then you could always just spin Rusted Angel or Steelbath Suicide again, both of which rather destroy this.