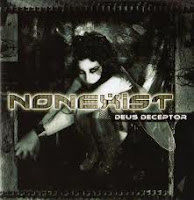 Post-departure from the ranks of the swelling Swedish breakout Arch Enemy, where he'd be replaced with the far less impressive Angela Gossow, Johan Liiva threw himself into a number of new projects to keep himself active in the scene. No extended vacations, no disappearing into the dust of metal past, just right back out there, hoping to find the consistent happiness he was probably lacking from the last band. One of these new found forces was the great death & roll band Hearse, who he's continued with to the current day. But also, for a brief time, he teamed up with a pair of other veterans to create what some might continue a rather close continuum to his famous alma mater, the short lived but explosive NonExist.

Joining Liiva for this brief ride were drum destroyer Matte Modin, whom many know for his incredible precision and speed in acts like Defleshed, Dark Funeral or their silly but amusing side project Sportlov, and John Reinholdz of progressive metal acts Andromeda and Opus Atlantica, who performed the bass and guitars on this record. As I mentioned, the sound here is not entirely removed from the albums Stigmata or Burning Bridges from Arch Enemy, but it's also remarkably similar to some of the Hearse material. Essentially, this is melodic death metal with some punch, kick and groove to it. There is also a tendency to burst into progressive friction in tracks like "A Halo Askew" or instrumentals "Entrance", "Ataraxia", and "Nowhere", since it would be unfair to expect Reinholdz to hold back the influence he brings to the table here.

However, these are not really the rule, but rather the exceptions to the majority of the album, which channels thick thrash and death metal riffs into the collision of Modin's insane kick drums, giving birth to the ragint "Death Incarnate" or the rampant "Eaten Alive", which has a taste of 90s Carcass groove to it. Liiva's vocals are not unfamiliar, but he puts a slight more blunt edge of anger into them that might not have flied over the more melodic Arch Enemy, which is fitting to the metric ton of ass kicking intended. Other barbaric anthems abound, like the frenzied "Phantoms" with its cheap but undeniable groove, or the brute but plucky "Delirious Tongues", which has an intense momentum that almost rivals Modin's other band Defleshed. "Ebony Towers" displays Reinholdz' high level of proficiency as he takes a grooving Pantera style riff to the next level before exploding into the verse, and its one of the better songs. Those missing the more accessible taint of Liiva's previous band are also serviced here with fare like "Divided We Hall", so inevitably there is something for everyone.

Deus Deceptor is not perfect, and there are times when it feels as if its been thrown together a little too quickly. I don't always care for the grooving rhythms, but at the very least you've got a great guitar player flying all over them and attempting to intensity their basic nature. On the whole, though, this is easily comparable to the Hearse debut Dominion Reptilian in quality, and I wonder that no follow-up was committed. Then again, there is the impression that this material was actually redundant to Liiva's other new band, even though it was not so rock injected. At any rate, anyone following his career would do fairly well by checking this out. NonExist seems to have lost a little of its luster through a few years and a few dozen spins, but its an interesting mix of ingredients, professionally served.