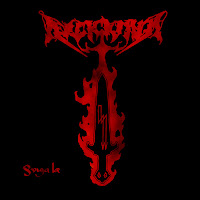 Arckanum's ÞÞÞÞÞÞÞÞÞÞÞ was easily among my favorite black metal releases last year, a stunning proof of concept that marked a new career height. Somehow, Shamaatae was able to wring a savage emotional ballast and superior songwriting out of a very simplistic series of riffs, and the crushing tone of the album was unlike any he had wrought before. Sviga Læ doesn't deviate far from that prior full-length, with a similar density of streaming, hostile guitars that twine very basic rhythms into atmospheric, mesmerizing patterns that celebrate its subject matter, two champions of destruction and chaos among the Norse pantheon: Surtr the fire giant and Loki the trickster god, and the burning perdition they will help reap across the brows of the Gods.

Riff by riff, Sviga Læ is not the equal of its predecessor, and I found it took a number of tracks before I started to feel that same level of engrossment. "Læ Elr" evokes a bank of thick and hypnotic riffs that feel like ice melting off the side of some far mountain, but the interaction of guitars and vocals doesn't ever really nail you down, and it is quickly surpassed with the driving "Gylðir Algørir", in which two separate guitar melodies wrangle off one another to a steady blast, converging into the verse, though this too is not one of the best pieces on the album. "In Følva Felr" slows the pace with some plodding, layered riffs that betray their simplicity through the captivating mood they create, like a somber Asgardian epitaph, before "Goðin Eru Blekkt" turns back towards a fiery, serpentine assault of roving black/death metal which recalled some of the better riffing of mainstream Swedish heroes Amon Amarth.

I found the second half of the album more involving. The style doesn't suddenly mutate in "Gramr Girnisk", but the structure of the riffs manifests a deeper mystique, a sodden procession that simultaneously channels mourning and destruction through the black majesty of rhythmic starts and stops. "Andskoti Ferr Austan" is simple and mechanistic, with a moderately paced black/thrash riff akin to later Immortal that opens into an exchange of open chords and trailing rhythms through which you can feel the shaking of the land, great bastions of stone and fire erupting in slow and inevitable motion through the landscape, a herald of the endtimes. This is the perfect place to launch "Múspellzheimr Kemr", with a riff so damned basic and memorable that it should be outlawed, yet unashamedly malevolent, and probably my favorite here. The album closes with "Røk", a sullen instrumental using only clean guitars, and an effective contrast.

Though not as powerful an experience as the masterpiece ÞÞÞÞÞÞÞÞÞÞÞ or the excellent 1995 debut Fran Marder, this 6th album is still among the better Arckanum material Shamaatae has written, and I can't think anyone that derived enjoyment from the prior effort would be left disappointed with this. He remains one of the more potent forces in Swedish black metal, ever tasteful, interesting and maintaining just the right balance of obscurity and loyalty to the traditional values of the genre. Like the Norse artisans Enslaved, Arckanum deals with the medium of Norse mythos in an intelligent, intriguing manner that doesn't belittle the listener with cutout Viking bullshit. It assumes some degree of fascination already inherent in its audience, and then pummels them with mood, a long, low craft being rowed to the end. There are moments of drag in the current, and whorls of wind and thunder battering against its hull, but it still eventually arrives, burning.

Posted by autothrall at 8:33 AM