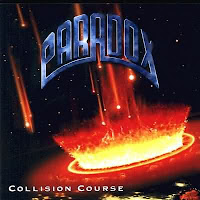 History was not so kind to us, exposing us to the brilliant Paradox sophomore Heresy and then forcing us to wait over a decade for a sequel, but for whatever reasons, that is how it played itself out. Once the 90s were in session, of course, thrash metal had all but died out, many artists simply giving up or releasing pathetic attempts to 'fit in' to the alternative and groove metal trends. Death and black metal wore the genre's armor, with their more excessive levels of energy and disposition, and the German thrash masters who had only so recently exploded into a Renaissance that today remains only rivaled by the Bay Area legends were whispered of only in tight circles of 80s worshiping guitar maniacs and nostalgic blowhards like yours truly.

Around the turn of the century, very few people were expecting to hear from Paradox, and yet in 2000 we were thrown a curve ball when Collision Course suddenly arrived out of the seeming nether. For the most part, this album picks up where Heresy left off, only adding the relative benefits of thicker production. You'll still hear the same flight, explosive guitar work, rooted in both fellow German thrashers like Destruction and a heavy classical influence. Steinhauer had a wider vocal presence here, still reminiscent of frontmen like a Belladonna or Eric AK but with that wonderful bite to it that was both melodic and venomous. If anything, Collision Course is slightly more progressive, the band willing to branch out just an inkling further than the first two records, but then bum rush you with the momentum you would want from the dual guitar team of Steinhauer and Kai Pasemann (the latter replacing Markus Spyth from the first two albums) and the Holzwarth rhythm team.

There's yet another acoustic segue as an intro, "Decade of Sorrow" (perhaps a poorly veiled reference to the decade we just spent sans a new Paradox album). "Collision Course" itself is also worthy of the previous album, and really all the band have exchanged is the lyrical concept from one that concerns religious fugitives to one that concerns us all, here on Mother Earth. Then, like Heresy, Collision Course continues to strike early and strikes hard, with the nearly 8 minute, cautiously thrashing excursion "Rearrange the Past", the spurious momentum of "Path of Denial", and "Blamed for Nothing", a melodic charger with a wealth of smaller, brisk leads and rhythmic shifts that complement the thrashing force. The tranquil "Saviour" and the frenetic "Shattered Illusions" are also worth mentioning, as is the pure bad ass thrashing of "Sadness". "Prostitution of Society" is likewise intense, but not a favorite here, nor did I fall as deeply into the pretty paint-by-numbers riffing of "Overshadowed", but it too does not lack for the band's energetic undercurrent. As a bonus, the band tossed on a cover of the Scorpions' "Dynamite", which they've fused successfully to their hyperactive conventions.

Collision Course is not my personal favorite Paradox album, but it's another notch in the band's quality resume, nearly as strong as its nearest neighbors Heresy or Electrify. It was more than welcome in the year 2000, when I had all but given up on any chance of hearing them again. Most of the songs here are worthwhile, but a few seem to lag behind in the quality of the riffs, or they simply feel redundant to other tracks the band had written by this point. In what seems a bitterly ironic turn of events, it would be another 8 years until we got a fourth Paradox effort, but then at least we got two in a row of superb quality. Collision Course serves as a worthwhile stopgap, a proof that even in its deadest hours, some of the giants of thrash metal were still stirring, still sending us a signal that they have not left us, to prepare ourselves for the genre's inevitable return from silence and suck, the dust whorls being systematically flecked off its rust-proof steel.