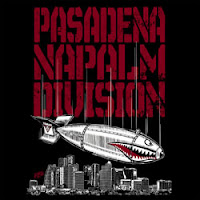 Pasadena Napalm Division is what naturally occurs when you transplant the instantly recognizable vocals of the dirty rotten imbecile of crossover royalty himself, Kurt Brecht, over the angry riffs and drums of the late great Dead Horse members Greg Martin, Scott Sevall and Ronny Guyote, then season with bassist Bubba Dennis II of Verbal Abuse. All Texas, all attitude, all the time, and the P.N.D. EP is the band's first foray into a recording studio. You're probably going to expect some high velocity crossover/thrash, and that is precisely what manifests here, a lot closer to D.R.I. than Dead Horse, but with busier riffing than you'll find on a classic like Dealing With It (or Crossover itself).

The band has no delusions about what it's setting out to create here, and that's a simple and fun unit through which to exert some anger and live entertainment. Six tracks in about 15 minutes. The lyrics are primarily of the sillier variety, as you could imagine from a title like "100 Beers With a Zombie", or "Spell It Out" which takes itself quite literally, but they often veer into a more depressing, slightly serious territory as in the self-derogatory "Failure". Musically, they're not out to waste your time, but simply trying to carve out another slice of the virile energy of the late 80s punk/thrash cross section. Granted, this also means you won't be hearing much of anything new in the riffs. Many of them sound wholly familiar, not only from the backlog of the constituents at play here, but through decades of the stuff all around the globe.

That isn't to say that Pasadena Napalm Division are incompetents, because they inject quite a lot of visceral energy into such basic components. Certainly, the 13 year old skateboard-drunk maniac within me finds something here that calls to the innocence of his soul, and the raw thrashing force of "Speaking in Tongues" and Spanish-tongued "Non Ti Amo" forced him out into a domestic circle pit, knocking over various piles of empty beer bottles, molded Thrasher mag subscriptions and labyrinths of unwound cassettes by Cryptic Slaughter, Bl'AST! and so forth. Deep immersion this is not, but then, that's never been the intent of this hybrid genre. P.N.D. is not home to a wide array of engrossing riffs, and I'd like to hear a full-length with better writing and more interesting note patterns, but the nature of this particular release is to force an ass kicking upon you as swiftly as possible with a carefree bluster, and that at least is on offer, even if your bottom won't remain sore for very long.