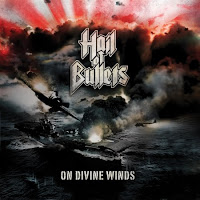 I'm a massive Martin van Drunen fan here, in particular his early work on the first two Pestilence records, which I consider perfection, so naturally I've been crossing my fingers for ages that he'll keep turning up on records. There's just something about his voice I find exemplary, a bloodied and battered edge through which one can truly feel the torture, something I simply don't experience through so many of the generic guttural throats out adorning death metal albums. Thus, the Hail of Bullets debut ...Of Frost and War was a godsend of hammering, straightforward war death which basically filled in the void that might earlier have been filled if van Drunen had wound up fronting Bolt Thrower longer than he did.

On Divine Winds picks up right where that leaves off, of course, which is to say it achieves a similar and suitable level of excellence. The lyrics continue to explore WWII, but they move into the Pacific theater of operations, and the music once again manages to carefully teeter on the brink of absurd, effective simplicity and superb songwriting. A balance of subtle melodic sadness and powerful, crushing force riffs make it almost impossible not to feel 'moved' here, and though some cite the wide vistas of the band's assault as underwhelming, I really don't see how any self respecting fan of Bolt Thrower, Asphyx, Grave or other old school bruisers could not come away feeling impressed here, because these Dutchmen know exactly what buttons to press to shove a tank barrel straight up the listener's arse. There is absolutely nothing technical about what Hail of Bullets write, and the album is insufferably primitive, yet it lands more powerful blows than about 90% of the wanking, progressive necronauts dotting up the landscape.

A glorious symphonic intro "The Eve of Battle" heralds "Operation Z", business as usual for the veteran generals, low and punching old school guitar rhythms so thick that even the single note rhythms feel almost chord-like, arching but morose melodies informing us that we are still clearly in the war zone, and very little good will come of our futures. "The Mukden Incident" functions off the colossal grooves of its verse, and "Strategy of Attrition" is faster and choppy like something Entombed might have written in their transition from barbaric Swedish death to rock & roll. "Full Scale War" teases a slower, graceful death/doom glaze not unlike a few of the earlier Asphyx albums, before returning to the field of battle, and ditto for "On Choral Shores", one of the most powerful juggernauts on the album. "Kamikaze", "Tokyo Napalm Holocaust" and "To Bear the Unbearable" are all likewise delicious, as least as delicious as an artillery shell being forced down your gullet with unswerving velocity and certainty.

On Divine Winds captures enough of a range in its pacing and performance that it never hinges on dull, though many listeners might now be feeling the weight of all the old school death metal that has clearly become a trend, and is bordering on a nuisance. The band realizes they can't simply look to the past, and thus there is a level of melodic integration here which transforms the sorrow stricken, heavy as balls subject material into something slightly more multi-dimensional than your average Bolt Thrower clone. I dare say that they are one of the 'catchiest' death metal bands out there, at least among the newer crop, and the collective experience of the band's constituents has once more ensured a primal, impartial glimpse into the oppression of warfare and the menace and far-from-obsolete majesty of death fucking metal.