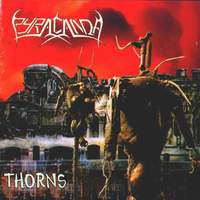 Though there was little if any buzz surrounding Pyracanda's solid debut Two Sides of a Coin, that can't really be attributed to any fault of the band. Thrash metal had been in overdrive by 1990, very nearing its saturation point and about to explode into disinterest as the legions of snorting, disheveled mongrels cut their hair, founded or hired off to Booming corporations and start-ups, their musical interest turning towards chaff like Pearl Jam and Use Your Illusion Part what-the-fuck-ever. I'm not bitter. Apparently, neither was Pyracanda, who decided to give it another go with their sophomore Thorns, transferring over to the obscure but fairly well represented Aaargg Records imprint, home to Calhoun Conquer, Sacred Chao, and Mekong Delta among others, with the full line-up from the debut intact and ready to improve upon itself.

Sadly, that is not exactly what happens here. From a proficiency standpoint, Thorns does seem like an incremental advancement upon its predecessor. The riffs are a little more thrash here, often a little more technical, and consistently moving at slower, mosh-oriented paces. The production simply doesn't have the body of the debut, with a thinner but crunchier tone to the guitars. As a result, Hansi Nefen is perhaps more clearly heard, and his performance rivals that of the previous effort, with the added benefit of less retarded lyrics (even "Shut Up!" isn't terrible, and the majority of what they've written here is even, I dare say 'thoughtful'). The real issue here is that, despite an honest effort to progress, the songs have little to no impact, each note thundering in and out of the ears in short order, leaving me with the impression that, while what I just heard was digestible and had the seasoning of a good idea or two, I just wouldn't ever desire to order from this particular bistro again.

It does being on a strong note with the creepy clean guitars and flutes of "At the Abyss" that collide into a writhing guitar line, but as soon as the Master of Puppets-like thrashing gait storms in after the minute mark, the potential seems to plateau and then you're just left with some average riffs, and Nefen doing his best to suckle some character out of the experience. "The Dragon's Cult" likewise begins with a fair enough set of riffs, also pretty Metallica, but nothing of note ever happens anywhere else in the song, unless you count the heightened presence of the bass during the forgettable solos. "Shut Up" picks up the pace, a rampant thrasher with some clinical guitars and a fine, eerie resonance to the vocals, but still not memorable, and then the album really falls off the turnip truck with the groove/rock infested "Two Sides of a Coin" (one of those too-late title tracks for a previous album)" or "Soulstrip", which truly sucks.

The latter half of the album first attempts to compensate with the creepy, progressive overture "18 Degrees", but again, there is nothing of interest outside of Nefen himself. "Montezumas Revenge" is a fairly riffy mid-paced thrasher, with a pair of catchy guitar parts that soon enough off themselves as they too fail to pan into anything worth saving. "Bad Conscience" is brief and mean with some pumping bass and driving anger, but it comes up a little too short in the riffs, and though "Senile Decay" thrashes with a little more complexity, the note patterns once again elude the memory. Thorns ends appropriately with "Thorns", a slower thrash piece with a good variety of riffs, and though it's hardly a saving grace, it is at least one of the stronger pieces on the album, with Nefer having schizoid conversations with himself and the gang shouts.

Ultimately, the sophomore is like going into the local brothel expecting you'll achieve some major erection and fornicate your brains out for as long as your wallet can support you, and then at the last minute realizing you left the iron on at home, gaping impotently and embarrassed at some strumpet who has seen it all before, could care less and simply wants you to hand over the cash. Pyracanda had all the intentions here of besting themselves with a slightly darker and more modern appeal, but ending up with a dull slog through material that had already fared far better under the tutelage of a Mekong Delta. Thorns isn't as disappointing, as say Deathrow's Life Beyond, because these Germans had not quite built up expectations with some prior, flawless masterpiece beyond the boundaries of comprehension, but it's got all the bounce of a flat basketball. The band brought out a Zippo when they needed a flamethrower.