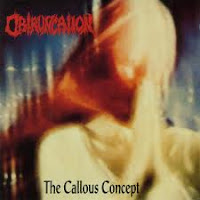 With a little bit of luck earlier in their career, Obtruncation might have dwelt among the ranks of the more premiere Dutch death metal bands like Pestilence, Sinister, and Creepmime. They were formed in 1989, and produced a few demos in '91 and '92 that were passed along the underground circuit, but never quite managed to snap up the same level of attention as their peers. Of course, for them to do so might have required some better music than the band were writing, but still, they were decent enough to ride the coattails of the genre's novelty. Some years later, they finally got their chance, re-recording the material demo and adding a quartet of newer compositions.

The Callous Concept was originally supposed to surface through a French label, but the band was stiffed and had to wait a few more years before someone closer to home would release it. By this point, the style they were performing must have seemed dated in the wake of so many more brutal and technical acts to arrive. As it stands, though, it's got a number of positive elements. The vocals are resonant and guttural, casting a frightening gloom over a track like "Church of Delusion" or "Sphere of the Rotting", the latter of which also features some morbid clean vocals. These are also used in "Mutual Hatred", one of the more unique compositions on the album, which opens like any other fast-paced, Morbid Angel burst of its day, but then segues into this odd, uplifting series of clean, harmonized vocals and an emotional lead.

More of this element might have produced a more memorable album in the end, but the majority of the material here is pure brutality that draws on a wide array of influences from Napalm Death to the Floridian abominations of Death, Malevolent Creation, and Morbid Angel, or the hyper thrashing force of a Sadus or Dark Angel. Blasting fare like "Sanctum's Disruption" and "Parish of Perdition" creates a massive centrifugal force through which the riffs and head spinning drums slice, each track attempting to beat you silly. A few travel at somewhat slower velocity, like the morbid Pestilence thrashing of "Repudiated Angel" and churning "Aroused by the Deceased" or "Pernicious Saviour" (yeah they had pretty good song titles), but even these have their fast breaks.

Obtruncation were a tight band, capable of complex rhythms, insane drum work and adequate leads that create an eerie added dimension that was so beloved in 90s death metal, but in the end, they suffer from one major problem: the lack of staying power in individual riffs. About half of what the guitars issue is molten, graveyard gold, but they are interspersed with very average, forgettable fare that reeks of missed opportunity, particularly in their grinding blast rhythms (a common flaw in many bands of the time). Thus The Callous Concept becomes a roller coaster of compositional peaks and valleys, in which only a few tracks truly survive the aftermath of forgetfulness ("Pernicious Saviour" and "Witch From Akyrz" still feel viably fresh), though nothing here could be accused of being necessarily bad. From an energetic perspective, they clearly trumped most of the other Dutch death bands of their day, but it is far too simple to resist this album's limited temptations in the face of superior works.