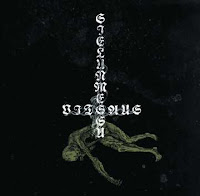 Vitsaus ('Pest', but Pest itself was taken several times over) is a traditional Finnish black metal duo featuring Vainaja, the most recent drummer for Horna, who also plays some of the guitar in this band. He joins multi-instrumentalist and vocalist Inho, and together they've discovered and extracted a medium between the primal savagery expected within this lo-fi genre, and the glaze of melodic clamor made prevalent by Darkthrone's Transilvanian Hunger. Ultimately, the band is best placed within the close kit borders of old Burzum, Darkthrone and Horna, and while there is nothing here that could be considered remotely unique, the band write their blazing black entrails out in the dust with a particular charm that makes the 35 minutes here a pleasure to sift through, even taken in one lethal dose.

Sielunmessu is the band's first proper full-length, but they've got an EP (Ruumiinvaellus, 2005) and demo compilation (Iäti Vihassa ja Kunniassa, 2004) available, both within the Hammer of Hate/Ahdistuksen Ahio family, one of the best places to turn if you're interested in this sort of orthodox tribute to blasphemy. The guitars here are constantly writhing, pulsing with both spilled blood and the life that such loss implies, while the entire mix is delightfully distant, as if the listener is not worthy to be slain in close quarters. Inho's vocals are the usual tearing rasp, not as full bodied as a Nocturno Culto but also not precisely the tortured whine of Vikernes' early albums. The drums splash and crash all over the mix, with a truly live representation, while the bass serves only as a vague notion to carry the arching riff structures. Speaking of which, as I mentioned, there's nothing really standout or different about the composition, but it successfully sears through both slower tropics and the rapid, burning cold of the north winds.

In other words, we can accuse Vitsaus of lacking in the surprise department, since the veteran listener can mentally map out most of what will happen within the first 30 seconds of each song, but what they craft, they do so with passion, opting never to dull the listener's senses, keeping their murderous edge even in their most long winded tracks like "Ylösnousemus" and the trembling, chaos-driven "Kaste", both about 8 minutes in length give or take a few seconds. The opener "Kuolleen Seurassa" offers the most accessible of melodies on the record, delving back into the desperate frustration and immediacy of 90s majesty, while "Haudalla" goes huge on sorrow, like a village in black and white mourning the death of mountains, of idols, of ancients, before they are cast into some abyss. Closer "Rekviemi" churns like the floods that accompany a violent sea storm, turbulent melodies ratting off like sabers on the hull of a damned vessel, in the best tradition of no holds barred, no prisoners Finnish misanthropy.

Expect nothing more than what you've come to from a band that honors and revels in their roots without attempting to expand upon them, and Sielunmessu should prove rapture enough to give a few listens. The guitar lines are hardly astounding, but they get the job done, and mixed with just the right, background resonance, one can close their eyes to escape the Christian oppression of the flock, journeying to remote times where raw strength reined above all, both of mind and body, and the world did not cater to the victims, the meek, and the manipulations. Vitsaus are like carving a slice into your wrist, the open wound inviting the frost and cold of reality, and this is what we desire from the better purist black metal sects. I cannot promise that you'll remember or return to this record forever, but if you think highly in the traditions of Horna, Sargeist, Behexen, and Satanic Warmaster, it may be worth at least a skim.