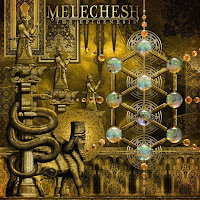 Since Melechesh's beginnings in Israel they have been crafting finely wrought occult Middle Eastern-themed metal, in the eyes of many reaching their peak with Emissaries, which I am unashamed to say is one of the best albums I have ever heard. The Epigenesis grasps that sound and moves it forward, spinning a nuanced, essential work with production that is even more suitable. The bass thrums impeccably beneath the two-headed guitar monster, and the drummer Xul is almost as capable behind the kit as Proscriptor was during his tenure with the band.
Melechesh waste no time picking up where Emissaries left off six years ago with winding, mystical black/thrash riffs and Middle Eastern drum patterns. It's primal, enchanting, and wholly evokes a time period where metal did not exist -- something that always reminds me of Running Wild's masterpiece Port Royal. What Rolf and company pulled off for pirate-themed metal, Ashmedi and his mates have done the same for their respective focus. However, where it does have that patented Melechesh sound, this is a diverse offering that continues to blossom on repeated listens.
"Grand Gathas of Baal Sin" shows off the big production of the album, all instruments culminating into a fiery sphere of liquid metal, invoking the rites of the Grand Gathas. Extremely primal, with a dark, driving force and the chanting of some esoteric, deadly force, only imaginable. Between cutthroat and satisfying morsels such as this there are some lovely instrumental pieces, the second of these entitled "A Greater Chain of Being" is simply beautiful. There is much use of divergent percussion throughout the album, countless traditional instruments, and even just a jot of clean vocals.
The lyrics are thoughtful, exploring "Sumerian/Mesopotamian/Anunnakian themes, as well as other occult near-eastern and cosmological philosophies and ideas," as frontman Ashmedi describes. He puts on another high quality vocal performance, his style closest to black metal but all his own. What Melechesh does as well as anyone else is absolutely bring their concept to life. Before I had listened to Melechesh, imagining "Mesopotamian black metal" or "Sumerian thrashing black metal" (both terms affixed by the band) would have been exactly this. Mysterious, magic(k)al, primeval, but most of all, it just rocks. This being the most important thing, of course.
Take "Illumination: The Face of Shamash." In a fury of tribal drums and ripping guitar we have one of the heavier Melechesh songs that I can remember, punctuated by a catchy middle section featuring some obscure instrument I cannot name. The song finishes and gives way to "Negative Theology," one of their songs with some traditional workings, a rarity. The final track, the title track, is a sprawls over twelve minutes and perhaps one of the weaker ones, though not bad.
As always, Melechesh have created and not re-created, The Epigenesis its own beast entirely, fashioned with care and a precise ear for detail. It is an album to hear, Melechesh moving from their past efforts (which range from good to perfect) to new ground, and yet still they maintain their evocative, unprecedented sound. Easily one of my favorite albums of the year as the sun begins to set on 2010.
Verdict: Epic Win [8.75/10]
http://www.melechesh.com/
Posted by JD at 6:52 AM