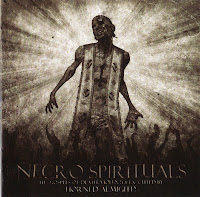 I don't often like to use the term 'fun' to describe a black metal band, because it might imply that the band is somehow less serious or sinister, and truly that is not the case for the Danish torture squad Horned Almighty, who write some of the most ripping, hardcore and rock influenced material in the genre. Stoked heavily on the influence of Hellhammer, Celtic Frost, Bathory, Darkthrone, and so forth, they continue to polish their hideous blades to a fine edge, picking up straight where they left off with the excellent Contaminating the Divine, and invoking a puerile jubilation so uncommon in the genre. Yes, Horned Almighty might kick your ass like a pack of excitable teen wolves at a Hell kegger, but they still kick your ass, and isn't that what counts?

Upon my first listen through Necro Spirituals, I wasn't wholly impressed, but I attribute this to my then-mindset rather than any flaws in the composition. The second time through, I slapped myself silly for this failure, and with each subsequent spin, I found myself in that same grip of tension and excitement that I submitted to on the prior year's excursion. Black, punk thrashing mayhem does erupt here, dynamically and quite often, as the Danes crash and careen through 9 tracks in 36 minutes, never wasting your time with any excess ballast or filler. Many such bands like Aura Noir prefer a more raw, understated approach to this hybrid that creates a morbid nostalgia for the records of the 80s and early 90s, but Horned Almighty spit in the face of this convention with loud, abrasive production values that could be appreciated by a number of audiences. Thick, knotted basslines and ripping, simple chord patterns collide with Smerte's hellish, demon-branded throat.

This is black metal for skin heads, punks, thrashers, or those emboldened, grim ghouls unafraid to come out of the damn basement for a street fight, perfect for inebriated or heavily drugged evenings of excess and knife dancing. Horned Almighty will hit you hard with blasting, thrashed and doped up inertia as found in the "Age of Scorn" or total mother fucking "Fountain of a Thousand Plagues", or teeter off into a more potent, lethal Bathory pace in such blasphemies as a "Sworn Divine Vengeance" or the cunt hammering of "Blessing the World in Pestilence". However, there is a deeper level at play, like the carnal black grooves and methodic, swerving bass lines that dominate "Absolved in the Sight of God", or one of my favorites, the urgent barbarism of "In Jubilation and Disgust", but I can't find fault in anything the band have concocted here.

Necro Spirituals rocks, and while it's perhaps not better than Contaminating the Divine, it thrives upon the same playing field. Considering the great sound this band is able to produce, and the stew of riffs offered in a constant bombardment that unifies their cult influences with a broad and modern sledgehammer, it's a shame that more people haven't taken notice. Perhaps this is the effort that will see the end of their morning star rising, but exploding across the faces of a million, hot Satanic lava raining upon the steaming cesspools, alleys and asylums this band seems to inhabit. I am often moved by black metal music, some times deeper than others, but there's something to be said for a band or album that comes along and actually have a good time without losing any sinister luster, and Horned Almighty are a cadre of baying street wolves that take a tire iron to the prevalent and pretentious attitudes, curb stomping them into red haze.