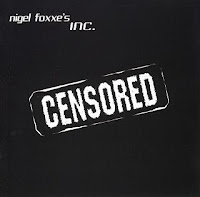 It's probably better to think of Censored as an afterthought rather than a new Nigel Foxxe's Inc. album, a thought that might have been better left within the brow of its creator than ever committed to the ears of those expecting War of the Godz Mk. II. Not that the man had gone reggae or calypso or anything, or written an R&B record: this is still metal music, at least marginally. But it's basically the very soft edge of commercial 80s AOR that was already well out of place, better suit to a crowd weaned on Kansas or Chicago than raging fantasy themed speed/thrash. War of the Godz was hardly a masterpiece, and Foxxe is best represented through his earlier work in the band Flames, but this must have seemed like a huge slap in the face to those few that had paid attention in the past.

The material here was written in about a decade's time, and considering all of that space, one could certainly have hoped for a better result, a worthwhile 'comeback'. Granted, there was no intention of ever releasing this to the public originally, and when it did finally rear its head it was through a tiny independent imprint, at the behest of vocalist Vasillis Axioitis, who replaces Foxxe himself on these recordings. Don't expect much of a similarity to Axiotis' work with the Greek power metal troupe Phantom Lord. Sure, he's god a talent here, able to twist harsher Jon Oliva-like tones into the more mainstream gimping of many of these tracks, but it's sadly too often wasted against the hopeless writing of the vacuous riffs, powerless synthesizers and so forth.

As for Foxxe, he feels castrated here. Gone are the speed metal overtures, the raw thrashing ability and momentum of the debut album. These are all replaced with amateur hard rock riffs one could have heard from any 3rd or 4th tier band struggling to make a name for themselves on American metal radio in the late 80s. You've got the opener "Drive", which is incredibly lackluster despite the use of samples and a pretty good lead. "Breakin' Point" is practically the same track, with the notes juxtaposed slightly as to avoid self-plagiarism. Weakling synth pads betray the solo, which is strangely again quite strong. I'd even argue the lead work throughout Censored is superior to War of the Godz, with far more direction. But that's hardly a major accomplishment when the environment in which they are asserted is so meticulously average.

Not every song is so incredibly void of potential, but even at its best, in the creepy frolic of "The Lost Boys" verse, for instance, you're still getting something that could have never walked in a Whitesnake or Quiet Riot's shoes had it ever even reached the target audience. By the time you arrive at an "Too Late", "Too Much" or "Angel of Pain" it has all become a blur of sad mediocrity, and the drippy power ballad "Lullabies" borders on atrocity. The rare exception might be the closer here, a piano/vocal piece "Take Me Away" with a slight symphonic swell, that one might easily hear a Geoff Tate singing mentally, not that Axiotis does a poor job with it.

Censored is not the sort of disappointment that conjures up harrowing hatred, or the burning of the listener's flesh as he gapes with awe at how far the mighty have fallen. It was a clear notice of direction change, and the abandonment of the speed and frenzy that characterized so much of Foxxe's earlier material. Unfortunately, the songs themselves would not have been up to the task, and it reeks of poor choices. Foxxe was aware of this fact, naturally, and thus the work was released posthumously, like a fan package, but not much of a love letter. The solos are consistent enough, the vocals just a taste of Vasillis at about one quarter of his full power, and "Take Me Away" mildly moving, but the rest of the material seems like a radioactive crater of dead dreams, pounded into the blazing steppes by one of the titular godz of its predecessor.