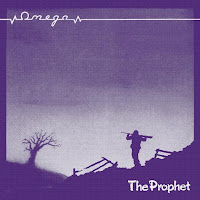 Another of the frighteningly adept NWOBHM acts cut off long before their time, Omega managed to produce only this one full-length effort, at least in this incarnation (the band reformed with their original moniker Apocalypse and produced a compilation and album earlier this year). But The Prophet forever stands as a dark and unique work that seamlessly integrates the attitude and driving hard rock/metal of their day, and the sultry brush strokes of 70s Sabbath-like doom and obvious progressive rock flourishes for an experience that promises more immersion, the deeper you dive into its atmosphere.

"The Dark" opens the album with a cautious bass walking over the subdued drums and clean, melancholic vocals of Nick Brent, before the power chords ring true and Brent raises pitch to create a mighty metallic force not unlike Tank or Manowar. As the track winds back into its next, bass-driven verse, playful guitars cascade across the thumping low end. There are 3 more segments, including a driving, Diamond Head/Metallica-esque raging rhythm beneath the lead, a mellow segue of harmonics, bells and vocals before the chords return and the vocals shift into a constipated, Lemmy Kilminster tone. Quite an epic mix here, all packed into the very first song. "Shadows of the Past" is even better, with more bluesy chords and a 70s Judas Priest vibe (i.e. "Victim of Changes"), with some uppity synthesizers and melodies in the lead sequence that carry you to that other world of the 80s.

"The Prophet" itself is one of two 9+ minute epics found here, with some very interesting guitar work that carries its narrative structure through atmospheric turns, almost like a NWOBHM answer to Pink Floyd in spots. "The Child" casts a similar hue, the other lengthy epic that closes the album with resonant, echoing vocals, spiky guitar melodies and shimmering synths. There are two other firm rockers: "Drive Me Crazy", which seems a more pedestrian track lyrically than the rest of the album, but still thrills with some solid, driving guitars that delight through various fills. "Yesterday's Children" once again reminds me of Lemmy, if he were more melodic and transfused into a glorious, melodic NWOBHM like Angel Witch. The band have also included a cover of the Beatles' "Day Tripper", strongly given an 'upgrade' to the metal genre through the loud bust of the bass-line and Tipton/Downing energy granted the guitars.

If The Prophet has a flaw, it's that it seems perhaps a little too diverse for its own good. You're taken from climactic landscapes of sorrow and brooding, bluesy reflection to shorter, sweeter tracks that exhibit the energy of most pedestrian, shallow bands for the day. Yet even these few relapses into the mainstream feel efficient. Brent and his backers might not have the most impressive voices in a world of Joe Elliot, Biff Byford, Bruce Dickinson and Rob Halford, but they're sufficient enough when you consider that all the members here were also playing instruments. There's just something transcendental, if at times cheesy about what the band were writing here, and needless to say they had enormous potential, so it's bittersweet that this became a one-shot. Easily recommended to those who like a little prog rock dose with their NWOBHM as found in Saracen, Shiva or Legend, just know that there is a dark, swelling undercurrent here.