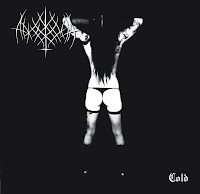 The way Possessed Demoness struts about the packaging for her Anguished debut, Cold, you'd think she was working the corners of Hell somewhere, ready to slice up any john who would dare bring anything less than utter blasphemy and perversion. Tattoos, leather, bullet belts, corpse paint and some of the most blatantly vapid, suicidal lyrics I've ever read characterize the fact that you're in for a pretty dark trip, unique in that it's one of very few one woman black metal outfits out there. But don't think for a second that this is any sort of gimmick or caricature, because once you press play you're in for something disturbing that cuts through the listener like a razor blade on an overcast, downer afternoon that goes too far...

First and foremost, you will notice the damn voice. Possessed Demoness screams and sneers like a mutation of screech owl, harpy and textbook wicked witch, or perhaps a banshee with a sword or burning torch shoved down her throat. This is beyond Varg Vikernes here, beyond even the vocals of Weakling, into a territory rarely heard in even the most depressive extremes of the genre. Singing like this could very easily become annoying, yet somehow she manages to implement it right at the edge of tolerance, so it never quite collapses over itself, and provides the perfect, ghastly pallor to ride the crescendos of raw, flowing guitars. Demoness performs all the instruments, and while she's not a virtuoso at any of them, they strike a fine balance which is miraculously able to carry the burden of the tortured lyrics being spit out across the darkness that controls her spirit.

Riffs are barbaric in the vein of Bathory, Hellhammer, Horna, Mayhem and Darkthrone, especially in the opener "These Gray Days", which is exceedingly simplistic but perhaps the best overall mesh of music and vocals on the entire album. This is a real eye opener, I recommend listening to it in the morning, replacing your daily warm caffeine ritual with a convulsive fit of ghastly shivers. "September Nights" is another of the album's high marks, nearly 8 minutes of slowly flowing blood rivulets delivered in shining grace with a giant 'fuck you' to all notions of comfort and contentment, though she does insert some cleaner, narrative vocals flush against the oozing momentum of leeched plasma. "Depart This Life" becomes so weighted with despair and violence that I felt the urge to flee my listening room and hide.

There might not a lot of surprises waiting in the metal compositions, but most of them are solid regardless, and often more melodic than you'd expect (i.e. "The Last Trip"). However, the album's 180 degree, bewitching title track finale is this scintillating vocal piece set alongside resonant clean guitars that proves Demoness can actually sing as well as snarl, so add that to her list of talents along with breathing fire. The production does not betray the album's title, with sharp and slicing guitar lines that add a crashing contour to each thicker, driving chord and a frost tinted ambiance to the melodies. I won't say I loved the lyrics, because they are perhaps too one-track in their intentions, but then, this is basically an aural suicide note, so you can't really blame her for neglecting to incorporate deeper symbolism and metaphor. Otherwise, this is a grisly, effective journey through a wrist-spawned, crimson tide, well suited for fans of primal Finnish black metal or the early 90s Norse pioneers.