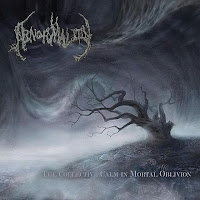 Abnormality is a local Massachusetts band which has been kicking around the live circuit for some years now, producing only one demo to my knowledge before this new EP, though some of the members have done time in other brutal underground death metal bands from the New England area (Ascendancy, Teratism, Sexcrement, etc). They're also one of the tightest we've got, performing a beast of semi-technical material with layers of powerful, non-cheap grooves and dense, tormented melodies, and female Mallika is the real deal. She's able to achieve repulsive gutturals and higher pitched snarling with ease, and though I can't claim she is all that sinister within either context, the percussive spread of syllables is well in line with the brickhouse storming guitars and teeth shaking drums.

The influences are of course plentiful here, with a particular nod to Suffocation, Morbid Angel, or Deicide with the excitement level cranked up. I would also compare them to the modern wave of California brutal DM, but the vocals and riffs are carved out slightly different, which might jut be a regional characteristic. The EP features three songs, which seem to get better as they progress. The title track phases into being with a wall of chords that don't really hint at what to expect, but these are followed by a standard, huge chug'n'squeal with choppy muted force and some rather intense footwork by the drummer. "Hatred Relentless" is simply more ear opening: the mix of vocals is more interesting, and the riffs explode across the reined blasting, with a particularly amazing atmosphere conjured by the solo.

"Zealotry" does one better, with the most cyclic and intense riffs found here, a barrage so ungodly you seriously might think artillery shells are razing your neighborhood. Here the band really flexes its chops, from complex machinations to the rumbling groove before the minute mark, and I love the choppy stop/start around 1:10 in the song, with many more surprises to fire at you. It's like a jam off of ferocity, the band trying to beat themselves to a pulp through some dynamic deathtrap labyrinth, and the payload is probably impressive enough to sate the taste glands of the extreme enthusiast. I can't cite Abnormality for indulging in a lot of innovation, this is your stock shock of brutality that a great many bands out there are churning forth at regular intervals. They know the terrain pretty well though, so a little added emphasis on riffing patterns or time signatures that stand out a little more from their demolition zone backdrop will go a long way for them as they crush forward.