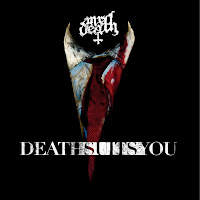 Mr. Death might seem a rather cosmopolitan spin on the classic Swedish death metal genre, what with their bloodied suit corporate zombie gimmick. Of course, this is not entirely novel within extreme metal as a whole, but I rather enjoy it when a band cultivates such a combination of class and carnage. Musically, they're even less novel, yet another in an endless cycle of bands dredging up the old school 90s dirt of Entombed, Carnage, Dismember, Grave, and their ilk to once again ravage the living, but Mr. Death seem to have one thing going for them: they know how to pace themselves, offering just the right balance of faster and mid-paced murder and groove to remind the listener exactly what he or she loved about the country's take on the genre in the first place.

Death Suits You is a stopgap between full-length albums, following on the heels of last year's Detached from Life, a foul meaning if ultimately forgettable debut that served only to register them among the crop of nostalgic gravediggers that has exploded in recent years. No risks were taken, no brains consumed in its creation, but it was competent enough. The six songs here are not a major step away from that material, but I felt like the brooding, morbid grooves that cut through "Curse of the Masses", "The Plague and the World It Made", or "On Day 51" offer a glimpse at maturation alongside a faster moving, unbridled antiquity of the guitar riffing, very similar to how Entombed or Desultory expanded their sounds to incorporate a heavier rock and blues influence, more or less gimping themselves in the process. However, Mr. Death does not suffer the same problem, because they somehow keep the guitars on the course of evil, even with something like "Strandead", which surges back and forth from pure repulsion grind to a more uplifting, d-beat riff.

That said, I didn't like all of the songs here quite the same. Opener "March to the Dark" in particular seemed like it might foster some promise, but I found myself numbing to its flustered gait. On the other hand, "Celestial Suffering" musters a doom-like intro worthy of Wolverine Blues, followed by the requisite rock pacing and a series of riffs that just seem to escalate in quality until the unexpected, transcendent melodies that charge into the eventual burnout. With more songs of this quality, Mr. Death are apt to turn a lot of heads loose from their sockets, since there is something more here than the tedium of the genre's unending saturation. Time will tell if the band follows up on these traces of potential, or if they whittle away into the shadows of overpopulation, but Death Suits You is only recommended to those who can't get enough of the style, hunting for slight variations on an apparently infinite theme.