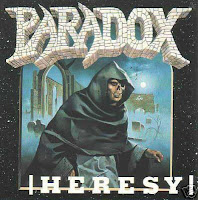 Heresy is yet another fine example of German craftsmanship, coming at such a time as the country was pouring out a large percent of Europe's best thrash metal, and marked a superb evolution in the sound of Paradox. Not to say that the band's debut, Product of Imagination was necessarily a slouch, it was a crude but promising stampede of harsher melodic thrash/speed metal that mirrored the earlier work of Deathrow or Vendetta, but song for song it's only vaguely memorable. By comparison, this conceptual sophomore was stunning, and the obvious effort shines through as both the songwriting and musical proficiency have been ramped up considerably. It also sets the stage for the remainder of the band's catalog, in particular their recent fare like Electrify and Riot Squad, which simply gather up the building blocks of Heresy and amplify them into a new century of denser production and enhanced aggression.

It doesn't hurt that the album is so well organized, throwing thrills at you for almost the entire playtime. Right from the start (the title track), Paradox exhibit their balanced, precision assault, with a calming acoustic lullaby that explodes into dual melodic guitars that transition into a soaring, beautiful segment, then becoming choppier as they escalate into the verse with its superb, clinical riffing. Charly Steinhauer sounds like a more acidic, nasal alternative to Joey Belladonna during his prime, the Teutonic accent giving that same beloved spin it has done for so many other titans of the 80s. Great bridge rhythms and leads follow, and in the end, "Heresy" is simply a classic of powerful speed/thrash that has never lost its shine, decades after arrival. Were it the sole product of brilliance here, we might write off the band as having a mere spike of inspiration, but "Search for Perfection" continues along this path, choppier and harsher with its biting technical thrash riffing and a great chorus sequence.

"Killtime" intensifies the speed, with walls of eerie melody that both explode openly of their own, and transform into delightful mute picking sagas behind the desperation of the verse vocals. This is probably the closest track the band had here to fellow German geniuses Mekong Delta and Deathrow, and it rifles straight into another serious thrashing in "Crusader's Revenge", the bouncing arithmetic of the frenetic rhythm guitars making a fine counterpart to genocidal lyrics. "The Burning" revisits the acoustic passage before a mid-paced thrust that comes off like a more crisp, technical Exodus. A good song with potential, but only 1-2 riffs to die for. Such is not the case for "Massacre of the Cathars", one of the very best on offer, or the similar "700 Years On", both of which are nearly as 'classic' as "Heresy" itself. "Castle in the Wind" is a tasty instrumental that once again uses the clean guitars to create a shimmering, windy atmosphere, and "Serenity" delivers some fluid, consistent riffs.

When this album first dropped in the late winter of '89, I was listening to such wad blowing masterpieces as Pestilence's Mallevs Maleficarvum, Scanner's Hypertrace and Realm's Endless War, so I wasn't able to immediately absorb myself with it, at least outside of "Heresy" and a few other tracks. Through the years, though, my appreciation has only grown, and I feel like today it ultimately stands alongside their modern output, which has thus far been both elegant and destructive, one of the finer 'comebacks' in all of thrash, returning to what matters and then progressing it towards the future, permitting thrash metal to breathe novel life instead of the stale gas so many 'retro' bands exude. The production here is pure perfection for its day, and you'll immediately recognize it as the work of Harris John's Music Lab studio, responsible for a number of other classics. The effort is impossible to ignore here, and Paradox surpassed their debut album in every possible category. It might have take 11 years to follow this up, but it was certainly strong enough to maintain the listener's interest through that very gap, and beyond.