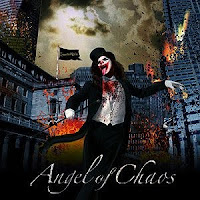 A bloodied, maniacal clown dancing about on its cover at the fore of an exploding cityscape. An intro called "The Earth Dies Screaming". It doesn't take long to ration out that Japan's Concerto Moon have returned, more pissed off than ever, to deliver their heavily shred based, classically infused bursts of power metal anew, and Angel of Chaos is by far the most frenzied and interesting album the band have likely ever crafted, though its predecessor Rise from Ashes was not exactly slacking off. It's sad that the band have gone so long below the radar of many power/progressive pundits, because really they are one of Japan's best at this style, joining similar acts like Galneryus, Anthem and Balflare to create a dynasty of empiric talent that stands tall despite the world's unwashed metal masses failing to recognize it.

Turns out that "The Earth Dies Screaming" is but a warning, a cascade of guitars plucking across the steady thrum of synthesizers, shifting into a melodic dual elegy that climaxes at the arrival of the title track, an explosion of Helstar meets Anthem joined by Takashi Inoue's weighted vocals. The guy can do melodic very well, but he's also got this nasty, aggressive bite to his tone that creates a multi-dimensional weave of emotion that is beautifully affixed to the racing and undeniable talents of the band below him. These gentlemen know exactly what the fuck they are doing here, and each song scorches the fan's heart, especially if that fan is appreciative of the Japanese peers like Animetal, the heavier material of X Japan, and so forth, plus those I've already named above. Tracks like "Lost in the Dark", "Right Here, Right Now", "Dance With the Ghosts" and "Plectrum" are loaded with excellent, immediate riffs and complex choreography that should have fans of Yngwie and Symphony X drooling and trading in those artists' entire discographies in order to import this.

I'd also point out that the band kick your ass nine times in sequence, no cheesy ballads in sight until "Just Before Midnight", which is merely a teaser to a jamming, melodic instrumental anthem. Then they kick your ass twice again with "Stand Up and Fight" and "The Voice of My Heart", both as intense as anything that has come before them. In other words, Concerto Moon do not brake for anyone here, and the furious energy and musicianship keeps coming with that sole exemption. Angel of Chaos is a barn burner, a frenzied effort that not only returns to form, but slashes the form straight in half, lights in on fire and then dances around in the ashes. Earlier works like Fragments of the Moon or Gate of Triumph had some clear potential, but this is angrier, more efficient, and well worth the coin of any diehard for traditional Japanese metal with kick and attitude.