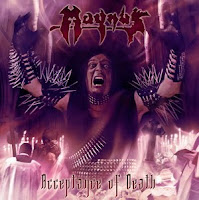 Very often, the human race will disappointment me, as with their utter failure to recognize the explosive talent and potential of obscure Polish death and thrash metal bands when it mattered most (late 80s, early 90s). Of course, I'm talking mostly about about Magnus, who released two fierce and pleasurable efforts in 1992 called Scarlet Slaughterer and I Was Watching My Death that, despite their wealth of aggression and riffs, were nothing more than a blip on the radar of a few European fans, and those of us who had the pleasure to trade tapes with those sick fucks. Blame it on Poland's political environment at the time, on economic problems, on lack of distribution channels. Blame it on the virtual death of thrash metal cum 1992, leaving hybrid bands like this one in the dust. Blame it on humanity.

Well, Magnus have seen fit to accept our apologies and flatten our faces with yet another effort, some 16 years after the third, forgettable Alcoholic Suicide dropped in it's tape only format (like many other thrash and death metal bands of the period in Poland, the cassette was the sole viable option). Naturally, the band have benefited from the increases in technology, thus Acceptance of Death is more polished than the previous records by several orders of magnitude. Thankfully, they have not lost their spasmic, blustering edge, and this new album is just as heavy, if not heavier than those scathing, savage offerings of the 90s, and you could probably best compare this to a more speed/thrash take on Vader, largely through the vocals, as Rob Bandit sounds somewhat like Peter in spots.

Magnus also have the tendency to get pretty strange. Not all is merely blasting formality here, as a track like "Worm" proves, opening with an intense barrage of speed/death and then dissolves into an almost jazzy discord, as if the Poles had been studying up on their copy of Gorguts Obscura. "They'll Bury" is also a little odd, like some sparse industrialized metal, bruising riffs cut down to electronic, staccato rhythms and space age sampled sounds ringing off under the bloated, bizarre vocal performance. However, most of the record delivers the blood thirsty neck whipping conjuration one might expect, like the initial trio of "False God", "Appear" and "Spirits" which all tear the face clear off the listener, since the ears strive to hold on. A few of the tracks like "Private Religions" incorporate slower, groovy rhythms that remind one of the meatier thrash of the 80s, like S.O.D. or Slayer's breakdowns, but even in this case, the pace is increased and more interesting riffs begin to flutter through.

Acceptance of Death does not live up to the first two records, which for their time were carnal and unswerving in their intensity, and possessed a raw, underground charm that truly enthralled me. However, what I can say is that this is really fucking heavy, even more death metal than the early work and proof that old bones can still crank out vitriol and speed to compete with the youngsters. I'll admit that there were not a lot of riffs here to come out and knock me dead, even though the pure, grisly energy of the band made for at least an engaging listen. It's no Scarlet Slaughterer, but for such an obscure entity as this to keep it together and produce a new effort after so many years simply reeks of conviction, and that the material is still decent is telling of their talents to begin with. So, welcome back.