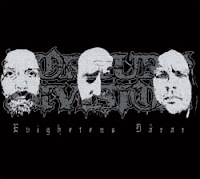 Torture Division is a name that you'll constantly see pitched around various metal forums or recommendation lists, and rightly so: they're a trio of Sweden's finest death mavens working in unison to produce material that dwells safely in the characteristics of the classic death, grind and d-beat rhythms of their other projects, yet never seems to fail to kick ass. As the band involves bassist and vocalist Jörgen Sandström (Entombed, Grave, The Project Hate MCMXCIX, etc), guitarist Lord K Philipson (God Among Insects, Dark Funeral, The Project Hate MCMXCIX, etc.) and drummer Tobias Gustafsson (Vomitory, God Among Insects, and once again also The Project Hate), it's not a surprise that their output is studio album quality and could easily span several full lengths, yet they've seen fit to go another route.

Essentially, the band seems to release a string of demos (three in 2008, three in 2009-2010) and then collect them onto compilations. Evighetens Dårar is thus the accumulation of Evighetens Dårar demos I, II and III, collecting that material in one affordable location (Abyss Records), as a follow-up to their prior comp With Endless Wrath We Bring Upon Thee Our Infernal Torture from last year, the separate visages of the band members (which graced each of the three constituent demos) joined together at last for 10 tracks of war stomping, aural rushing madness. The sounds produced by the band mirror some of their past works (namely God Among Insects or Entombed), but they also dwell in that loud, simplistic category of purist death metal that might thrill fans of a Hail of Bullets, the Rogga family of bands like Paganizer and Ribspreader, or even the German Horned Almighty. The latter has a decidedly more black metal spin on their style, of course, but the simple flow of the rhythms and bass have a similar undercurrent.

Torture Division knows how to hook you on a basic riff and provide enough dynamic fiber that you won't be able to escape listening through the entire 2-3 minutes. Yes, they keep their material short, perfunctory and powerful, without experimentation or the excess 6-7 minutes of bloated viscera that often define some of the more confused acts of this type. "Heretics! Now!" exclaims itself like a hammer on the neck, blasted, almost grinding force that measures itself out into thrashing perfection, while "Eld Och Plågor" crawls along as if it were a mid-90s neanderthal written Morbid Angel groove diluted with the bluntness of a Grave, which later segues into this brilliant old school Entombed melody, and then a fist fucking breakdown. Want something faster? The band provides "Righteous Fore Ensemble", "Under Fire Command" and the :9 second epic "The Axe Murderer". Want something more meaty, with grooves? Take "Ravishing Rampage Sluts" or "Overtorture" for a spin.

Thanks to a Dan Swano mix, the material sounds just as professional as nearly anything else coming out of this turf, and therein lies another comparison, to another Swedish super group. Surprisingly, Torture Division have written a set of songs here that easily match the works of Bloodbath, and to the worshipers of those primal panderers, I grant you: your new gods. So if you think there's still room left in the arena (i.e. your wallet) for another class act of Swedish barbarism, there is simply no way you're going to lose with this recording, which should reserve some space on your CD rack next to its predecessor. It's not perfect, but it will beat the living tar out of you.