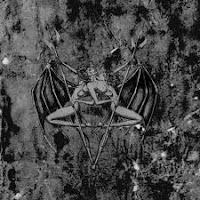 The sadistic, seductive cover to this French band's EP promises a pentagram of lascivious filth, an aural excavation into deep, diabolic demesnes which shall indulge both the flesh and the deviant mind, twin heralds of lust and pain that raise their spears to the glory of the unholy. The music is not far behind this, a disgusting, distraught sequence that merges the traditional with despondent song structures, trawling, troll-like vocal ruminations and oppressive atmosphere delivered through both the surging of the guitars and the humble, organic production. This is not your average, necrotic level of toilet trained anti-studio submission, but a straightforward and contemptuous trek from the instruments to the ear canals, and let madness take any who falter.

Prostration was a 2006 release, limited to a small run of mini-LPs, seeing resurrection at the capable hands of Ahdistuksen Aihio Productions this year. Perhaps it's the sign of future terrors to transpire, or the mere archaeological digging of a near miss on the radar of the cult conscience, being masochistically bombarded by thousands of such efforts every bleeding year. Whatever the case, I'm glad I caught the opportunity to indulge here, because this is a frenzied and exotic dance of rhythmic blades that hints at strong potential. The band, bearing sharp edged pseudonyms like Shamaanik B., Messiatanik Armrek, Kristik A.K. and Eklezjas'Tis Berzerk cut pretty deeply with this EP, a mere 23 moments of suicidal intensity that never wears out its welcome, burrowing itself into your personal fears and dementia like the closing walls of a claustrophobic nightmare.

Hyperactive, savage discord and fast, flowing bass exercises dominate "Obscurus Religiosus", like a chamber of asylum inmates shut off from their oxygen supply, flailing away at the walls and one another in a grisly display of futile self-preservation. The vocals are a mix of the expected, gnarled rasping and some deeper death grunts, and this only adds to the schizoid matrix of despair from which the band toasts your demise. "Première Louange" would be what happened if Attila Csihar invaded Voivod's 1988 recording sessions, tripping the band out on whatever he had handy, like paint thinner, while sneaking into the vocal booth to vomit all over a rehearsal test track. "Fidèles Serviteurs" channels loose walls of horrified, godless rasping through a chaotic labyrinth of confusion, a tumult never transcending save to throttle you in a slightly higher pitch. Let's not forget the opener "Nothingness Way", and its circular, frightening ritual chants against which some unidentified noise clamors, before the most accessible, raging guitar rhythms on the album manifest.

Just when you think you've heard it all, and well, you probably have, yet another French band comes along to unzip their collective flies and dump their transitive genes into the studio womb, and though Malhkebre might not be 100% unique, they certainly twist and wind their influences into an impressively distressed whole. This is filthy music for sinners. Demon fluffers. Dead-inside priests of perdition. Surfers on the vortex to the abyss. Unsanitary archangels of pestilence and plague. I hope this is not the last we've heard of it.