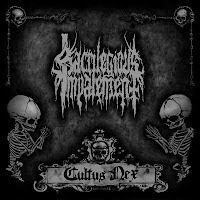 Sacrilegious Impalement sees another merging of infernal forces into a new, diabolic whole, these particular miscreants hailing from the ranks of other, obscure Finnish black metal acts like Uncreation's Dawn, Urn and Goatsodomy, all of whom 'keep it real' through their myriad, unholy interpretations of the traditional landscape of hell on Earth that we all try to turn a blind eye towards in our ultimately futile lives. However, perhaps we have no cause for concern, as the Finnish members of this band, who wield the godless names of Hellwind Inferion, Von Bastard, Revenant, and Tooloud (which is possibly my favorite), seem to have our backs, indulging in enough death and damnation that perhaps any theoretical divine being might spare the rest of us from further purgatory. Cheers to that!

Cultus Nex is the debut album, following a pair of EPs, and it draws upon all the expected influences, in particular Bathory and Hellhammer. Fast, flowing rhythms are given a considerable depth due to the album's rather strong production, not a common trait among underground Finnish black metal releases. What's more, the vocals of Hellwind Inferion often verge on death metal, or rather a lower, more guttural black rasp, and this lends the material a heavy bottom end weight that anchors the hellish of repetitive guitar rhythms. At best, the band are moving full force forward, as in "Total Annihilation", "Utterly Rotten" or "Holy Terror", demonic air strikes that leave no room for breath or forgiveness as they rain infernal napalm to scorch the ears of the beholden, but they are also capable of pacing themselves with some eerie, slower moments, at least in the intros to several tracks. "March of Doom" feels like something off Blood, Fire, Death if it were given a more modern studio treatment and lyrically abandoned the Vikings for the Legions of the underworld, great for swilling or swinging a mug of brimstone.

Sacrilegious Impalement squeaks by here, barely evading mediocrity, but not because they're necessarily original or all that inspiring. The song titles alone will tell you that there's not a lot of ambition happening, as most have been used before a number of times on the extreme end of metal, and the black/white imagery and album title all feel rather played out. The riffs themselves offer a sheen of dense atmosphere that betrays the rather crude writing, and played loudly enough, Cultus Nex does offer the expectant, ritual immersion of its genre. The deathly spin on the vocals adds a little more incentive, and the production sounds great on headphones, car speakers and so forth, so those expecting a very distant, toilet mix might be disappointed at the quality. Ultimately, it's another of those largely traditional black metal albums that I enjoyed for the duration (about 43 minutes with the bonus track), but won't be compelled to write home to Hell about any time soon.