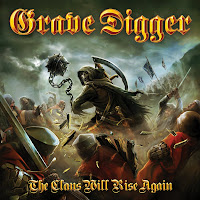 As with most veteran metal bands with 30 years under their belts, Grave Digger have had a series of peaks and valleys through their career. At the worst of times, Chris Boltendahl and his stable of prize horses would became laughable, as in their decision in the late 80s to drop the 'Grave' from the name and play commercial keyboard hard rock as the lame Digger. At the best of times, they have been nothing short of inspirational, as in The Reaper or the excellent Edgar Allen Poe concept album The Grave Digger. However, many would argue that their 1996 effort Tunes of War stands as their crowning moment, marrying Boltendahl's gruff vocal presence with solid anthems, a Braveheart gone power metal concept album that helped thrust the band back into the spotlight their peers Running Wild and Blind Guardian were enjoying in the mid to late 90s.

I am not part of that 'many', and while I enjoyed Tunes of War for obvious greats like "Rebellion (The Clans are Marching)" or "The Bruce (The Lion King)", I would not count it among their very best. Nevertheless, it is to the hills of Scotland and the events of William Wallace's native land that the German gods have returned to, just in time to celebrate 30 years of existence, so The Clans Will Rise Again is a sort of sequel that pulls the looking glass back a few leagues to examine Scotland as a whole. Riding on the coattails of Ballads of a Hangman, one of last year's most worthy power/traditional metal efforts, and seeing the introduction of Domain axe slinger Axel Ritt into the lineup, I build up a huge anticipation for this album, the 14th full length, and perhaps I set myself up for just a touch of disappointment.

No, this is by no means a bad or negative entry into the band's considerable discography, and in truth it's nearly an equal to Tunes of War, but I felt some of the songs were slightly less potent and consistent than its predecessor. Ritt fits the gauntlet very well here, easily dispensing the traditional Grave Digger riffs rooted so deeply in Judas Priest and Accept influence, and offering a healthy heap of shred without ever taking too far into the realm of self indulgence. Chris's vocals have their standard level of studio excellence, huge and dirty and distinct, proving that this genre does not solely belong to the shriekers and Lucio Pavarottis, and the rhythm section of Jens Becker and Stefan Arnold are so tight that they could probably step away from their instruments, and through the power of habit, they'd keep playing themselves efficiently. Add to this the careful addition of atmosphere through glorious, simple synthesizers, bells and other instruments which don't feel out of place in the Scottish realm, and you've got 53 minutes of solid, at times imperative material.

"Highland Farewell" feels like "Cat Scratch Fever" set on stun and sent careening through the highlands, with a lovely bagpipe intro and polished power metal visage, glorious chorus. "Rebels" generates a force akin to peers Primal Fear, U.D.O. and so forth with some familiar, melodic and desperate riffing. "Valley of Tears" is one of my clear favorites of the record, with a steady mid paced rock rhythm through which you can hear Ritt's strings sweating distortion, an almost dark jazzy texture to the melodic chords being slung below Boltendahl's verse. "Execution" takes a riff quite similar to "Painkiller" and then throws a little melodic twist on it, and "Coming Home" brings the roof down, with a bagpipe-gang vocal accompaniment that escalates into majesty, before the stolid weight of the finale "When Rain Turns to Blood".

The rest of the songs are engaging, but after a few listens, "Hammer of the Scots" and, say, "Spider" just felt like so many other Grave Digger songs of years past. Competent, the former with a nice battle segue, but ultimately not the sort I'll be skipping towards. I had expected "The Clans Will Rise Again" to be some epic monster anthem that rivaled the catchiness of its predecessor "Rebellion", but aside from the gravitas of the guitars and echoed vocals of the chorus, it's not highly entertaining. Thankfully, this is in the minority here, and hardly stands out as some sore thumb against the album's atmosphere. Speaking of which, the "Days of Revenge" intro is quite nicely done, as is "The Piper McLeod" interlude. Both serve to immerse you into the coming kick to the knees when the band begins to rage.

The Clans Will Rise Again is certainly enough to please the Grave Digger fanatic of The Reaper and beyond, and it stands above a few of their other concept albums like Excalibur or the mediocre Knights of the Cross, but the sweet kiss of masterpiece perfection still seems to elude them here. That said, anyone enamored of Scottish history and the strange fascinating this German band holds for their distant neighbor is unlikely to find metal music that better fits the place and concept, and there are at least half the songs here would be worth anyone's time. Anyone with ears, that is.