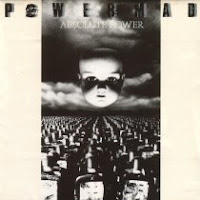 Perhaps better known known as 'The Field Guide on the Attack of the Disembodied Babyhead Legions', Powermad's sole full-length offering created quite a splash when it arrived right at the end of the 80s, a few years after the promising Madness Within EP. Here was a band not only capable of writing a catchy thrash tune, but infusing it with a classic metal sensibility, big hooks and memorable melodies that were unusual among the street level thrashing aggression that was perhaps all too typical. In fact, the Minnesotans were arguably as much a power or traditional metal band as a thrash outfit, equally accessible to fans of Fifth Angel or Queensryche as the larger Metallica/Megadeth mob, and this saw them not only scaling the ranks of the US 80s metal hopefuls, but also with a cameo appearance in the film Wild at Heart.

Well, the surge ended here, and Powermad would never release another album, going their separate ways and ultimately dissolving into the dusted linens of thrash closets everywhere, but what they left us with was a fairly enduring panorama of promise, a slew of simple but efficient riffs that will still get the head banging when blasted at high volumes, as corny as they can at some times feel. This corniness manifests itself in the bouncy bricklaying mannerisms that grace such milieus as "Return from Fear" or "Test the Steel (Powermad)", in which the vocals seem a little too pedestrian, and frankly loud. Granted, the latter track has an amazing riff structure that saves it from the slag pile, and through almost all of the material on Absolute Power, there is this amazing sense of melody and wonder that fuses itself to the very resonant tones. This is one reverb ridden tumult of an album, but it sticks far more often than not, and when the day is done, it ultimately deserves its place as a minor US thrash/power classic.

There are specifics. Songs that absolutely shatter the expectations of the EP and provoke the drooling, and they arrive in full force as "Slaughterhouse" commences the escalating battery or staggering breaks that soon transform into its core verse riffing. The old 'epic intro' trick at work, and the song itself is quite strong, Joel DuBay howling his clean but far cast tones over the shuffling, march-like war thrash rhythms. "Nice Dreams" is another scorcher, an amazingly melodic piece that would have been in regular MTV rotation had it appeared on Operation: Mindcrime and not this album. The riff is unforgettable, and amazing, like a "Sweet Child o' Mine" or "Speak the Word" if it was being hurled over a Midwest mountain range. Glorious. Once "Plastic Town" eschews its acoustic intro for a happy go lucky, rapid moving riff pattern, it too delivers, and "B.N.R." would be the second most elegant track (after "Nice Dreams"), if only for that excellent intro. "Brainstorms" and "Final Frontier" are also well worth the wait until they arrive at the close of the album, two bombastic pieces with well considered structures.

Most 80s ragers with even the most remote semblance of history or knowledge will already be well versed in this record, but it's 'absolutely' worth the finder's fee if you're a newcomer to the period's more pronounced acts. Powermad are not as forceful or complex as either the Bay Area or German thrash scenes, but they trade that level of callous-causing speed and raw flexibility for some decent (to great) songs with simpler, driving rock drums. It's astounding that the band did not have another in them, because "Nice Dreams" could have been huge had it gained some further exposure, and "Slaughterhouse" and "Final Frontier" (listen to that solo before 3:30) are knockout blows. Absolute Power is not without a few slackers, in which the sum of the riffing feels pale amongst no brainers, but it's not something I'll forget before the onset of Alzheimers.