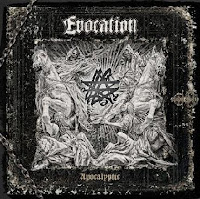 Constant exposure to such a vast wealth of Swedish death metal, both old and new, serves as a double edged sword. It's clearly one of the most redundant sub-genres of the style, with a clear excess of players in the field hammering out the same riffs, the same tones and the same overall atmosphere to the point that the connoisseur's tastes are soured beyond repair. On the other hand, hearing so much of this approach in the past few years certainly goes a long way towards separating the chaff from the wheat, and as Evocation have already proven with their prior albums Tales from the Tomb and Dead Calm Chaos, they are not a band to be trifled with: something more than your run of the mill, competent practitioner of the form, but still being eluded triumphant overture that will elevate them into the pick of the litter.

For sure, Apocalyptic is one of the better of this sort of offering I've heard in recent month, for Evocation do not merely rehash endless riffs from Entombed, At the Gates, Dismember, and so forth. They actually attempt to assert some of their own individuality to the proceedings, and this is often manifest by an enhanced attention to the underlying melody that complements the burgeoning brutality of that pure Swedish crunch. This is evident in "Sweet Obsession", the rather sultry opener that runs you through with a rare glimpse at beauty, and to a lesser extent "Reunion in War", "Murder in Passion", "Curse on the Creature" and "Psychosis Warfare", some of which seem to bear an influence of slightly more obscure bands Eucharist, Unanimated, Centinex and Utumno. These are measured off against the more expected, grisly brutality of "We Are Unified Insane", "Infamy", "Parasites", and the triumphant grooves of "It Is All Your Fault", which is perhaps one of the best of this lot.

All of this is handled with precision and a professional solidarity to rival the legends of the genre, and in truth, Evocation may damn well deserve a trace of recognition hovering just below the bigger names (they've been around since 1991, just took a very long vacation for over a decade). I found the album to be a mild improvement over its predecessor Dead Calm Chaos, and sitting parallel to the 2007 full-length debut, with enough memorable material to render it obvious that time and effort were evoked here beyond the mere twiddling of knobs and simple carbon cloning of the classic guitar tone, which is obviously the most noted characteristic of the country's scene and the thousands of bands worldwide who aspire to copy it. If only more would take a page from Evocation's notebook, because this is one of the bands that prove there might be something left to explore in this tired, sagging schematic, without abandoning the fundamentals to oblivion.