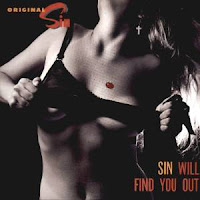 Sin Will Find You Out seems to promote itself as some sort of smutty hard rock album, at least if we're judging by the titillating cover and boring logo. But ignore these traits and explore the actual contents, and you'll encounter something you might not have been expecting: a dirty, high speed race through the thrash/power/speed terrain of the 80s that was largely male dominated. I say this, of course, because like their neighbors Meanstreak, Original Sin was supposed to be an all female East Coast riot squad that proved the fairer sex were more than capable of creating durable and unforgiving street anthems that inspire violence and passion worthy of the majority of their male counterparts. But in this case, it was actually just members of Virgin Steele with a female singer (David DeFeis' sister). These 'ladies' could play, but more importantly, WHAT they played was exciting and infectious, like a case of aural gonorrhea picked up from one too many nights of broken bottles, garbage strewn speedways and abandoned youth.

I realize that David DeFeis of Virgin Steele had some involvement here with some of the writing and performance, but I feel like Original Sin has a slightly more European feel to it than, say Exorcist. In particular, I think of "Fast as a Shark" on some infinite, mutating loop, or more accurately Iron Angel, what with Danielle Draconis' acidic vocal stylings and the raw, filthy speed applied to the guitar work, and that is what makes this album such a delight. The first three tracks here speed by with sheer excellence, once you climb past the hokey intro to "Conjuration of the Watcher". Excellent momentum and superb vocals are characteristics of this, "The Curse" and "To the Devil a Daughter", and there is no way any heterosexual male with taste can resist the rise of both testosterone and adrenaline inspired by these. After this, the band indulges a little with a rather uninspired guitar solo not subtly titled "A Slice of Finger". Perhaps there was something to prove here, but it would have been best left off the album entirely.

Fortunately, they return with a far superior statement in "Bitches from Hell", another volley of aggressive speed in which the vocals simply rule, the guitars fluttering all over like Accept on crack-cocaine, or Tipton/Downing suffering from an extreme case of Male PMS. "Succubus" continues the indulgent streak of "A Slice of Finger" with a 45 second drum solo that does the actual meat of the track little service, and once again, it could have been clipped to retain the quality and consistency of the music that matters. The song itself is not one of the better on the album, but it's followed by the incendiary "Pandora's Box", which blew my socks off. They get the bass solo out of the way with "Thunder War", scraping it off with some multi-tracking ambient effects, and of the three solo pieces, this is clearly the most musically engaging and interesting. "Enchantress of Death" burns forth like old school Overkill, and "Disease Bombs" shuts down the roadway with more crisp speed throttling away on the engine beneath some more eerie, resonant vocals.

If you're into Exorcist's Nightmare Theater, Iron Angel's Hellish Crossfire, or Overkill's Feel the Fire, then you absolutely must track down this album, because it's just about as good as all of them, and sexier. I would love to have had more from this band, perhaps a few more studio efforts that retained the intense pacing but delved a little deeper into the riffing foundation, since they likely would have kicked a whole parking lot of metal ass and become quite popular. But, like Meanstreak, like must have just gotten in the way, and there would be no more Original Sin. Don't be fooled by the cover art! Aside from the unnecessary instrumental solos which would have been better left for showing off in a live set, this is a pretty darn good album, and one that should thrill fans of mid-80s speed, power and thrash metal. Had 1986 not been a year that produced masterpieces like Master of Puppets and Reign in Blood (pretty much my own favorites, so it's not like I can blame them), a lot more people might have noticed this stalwart effort.