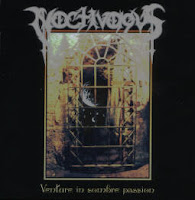 Nocti Vagus were yet another in a long line of European black metal acts to draw their influence from Norwegian contemporaries like Emperor, Dimmu Borgir and Ancient, producing this sole full-length through Solistitium the same year they changed their name from Nordwind, under which they had released a few demos. Members have since gone on to slightly bigger venues such as Vargsang, Graven and in the case of vocalist/guitarist 'A', some Finnish bands of note like Horna and Totalselfhatred, but for a brief time there was this dark stab at bewitchment, a lost voice among a yet emerging German scene that was largely ignored outside of the infamy of, say, Absurd, or the best attempts of a few other developing acts.

'Nocti Vagus' translates to 'Night Wanderer', and the sound here is certainly worthy of such a title, though there is little depth to this particular journey outside of its nocturnal oppression and wishful grandeur. Keyboards and faintly audible drums carry the weight of guitars that buzz at the edge of perception, notable most when they break for the more somber, slowed passages, which hint at the influence of Gothic doom metal. The vocals are a mix of common black rasps and soaring, downtrodden clean vocals, the latter of which feel a little low here, as if the level of confidence were not so high with the style. However, neither of these is necessarily offensive, even if they fail to capture the menace of the Northern bands they emulate like Burzum or Emperor. The flaws here are ultimately in the compositions, the failure to create riffs that can adequately complement the atmosphere.

Early tracks like "In the Deepest Depths Grows the Greatest Flower of Tomorrow" and "Astral Revealers of the Hidden Secrets" have wordy titles, but the riffing speaks little, like a muted strain of In the Nightside Eclipse, less vicious and less functional with the exception of bridge sections where the guitars ring off across the busy, dreamy synth-scape. The title track follows a similar pattern, like some derivative escapee from Born of the Flickering or Stormblast. When we arrive at "Rising of a Nonexistence", the melancholic, driving crests of the guitars seem to link well to the somber keyboards, and the slower pace creates a dimension of morose power that I hadn't really felt in the previous tracks, with the exception of the "Astral Revealers..." bridge. This track does become somewhat tedious, but it's at least more involving.

"To Be Lost in Space and Time" returns to directionless blasting and depressed friar vocals, with some decent bass swerving beneath, but it seems a clutter, the guitars tripping over themselves as they affix to the rhythm of the synthesizer. After this, though, we get two more slow tunes which once again bring out what I feel to be the stronger aspect of the band: "Seen Through Black Eyes" is simple yet glorious, and "Face Reality" concedes its early thrust for a lamentation of sparser, doom-laden guitars that somehow function next to the moaning, perturbed vocal scheme. Nocti Vagus attempted to close this effort with an epic, 12 minute track "Waves of Undimensional Seas", and there are several lush moments within including tapping guitars and full bodied synthesizers, but the song is clearly overweight, with a number of dull and repetitive sequences that serve no other purpose than elongation.

Apparently the band were nonplussed with the effort themselves, deciding to go their separate ways and scrap the project. But though it leaves something to be desired, Venture in Sombre Passion is not a complete bust. There is a particular dark Romanticism here which was best captured in the mid to late 90s, and like similar efforts, this album does have the ability to conjure abandoned European landmarks under the cold sheen of night, snow, and starlight. It's more a tribute to sadness than aggression, and lacks the consuming mayhem and egotism of something like Emperor. At times, the sodden miasma of the poorly produced guitars is charming as albums from this period were, but at others, you just become annoyed that it all sounds like a sea of fuzz over fluent but unimpressive keyboards. I got the impression that the material was struggling hard not only to maintain my attentions, but to keep itself awake.