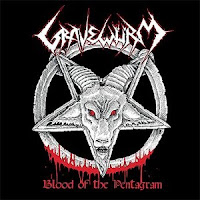 After 20 years of debauchery, Gravewürm could well be considered an institution of USBM, cranking out a slew of demos in their first decade and then 'going pro' in the ensuing 21st century. Their first four albums were released through Barbarian Wrath, and since that point they've been floating around through a number of imprints. Blood of the Pentagram, adorned in one of the most enduring (if a mite generic) cover images of the year, is their 7th full-length, and it has been snapped up by Hells Headbangers, a move that really makes a lot of sense, since much of the label's roster practices a similar philosophy of no nonsense old school hybrids of extremity.

Likely you've already gathered the impression that Gravewürm create blasphemous black metal, and this is the closest proximity to their sound, though they also incorporate elements of thrash, death and doom. The compositions are extremely simplistic, focusing on a narrow range of riffs and rhythms that attempt to bludgeon you with blasphemy, and almost all of them involve some slower thrashing riff with driving rock drums, over which Zyklon gargles devil's blood with a constipated rasp. I suppose a fair comparison would be Venom, since a lot of the chosen chords seem to reflect the primal, dirty feel of those days, only stretched out a little as if to increase their menace and weight, but in songs like "Deeper Dungeons", there is this glorious, Bathory bombast to the material, though there are no Vikings or Norse gods to be found here. I'd even risk a further parallel to Bolt Thrower, but this is largely cerebral in the way some of the specific guitar riffs roll out as if across a depressive, eternally grim battlefield.

I'm not inherently opposed to such simple tactics in writing, of course, and through the years I've gotten quite absorbed in a number of similar acts, but I felt like there was something lacking here. It might be the energy, which seems sluggish if oppressive. Perhaps the riffs were given just a little too much room to breathe, not offering a standout variety of chords. The band is usually functioning at a laconic, warlike pace as in "Deeper Dungeons" or "Lycanthropic", or a steady, thrashing terminus with "Grave", "Brought Before the Altar" or "Hordes of Hell". Unfortunately, they do not greatly succeed in either category, so it falls to the few tracks that reach an even more drawn out, atmospheric pace to pull the weight, and there are just too few of these. "Necromance" might be fiendishly fundamental, but the spry, daemonic notes create a diamond in fleshy rough, and "Two Chords for Charon" adds in a keyboard for a somber necrotic delight of blackish/doom. Finale "The Sign of a Dark Destiny" also forces a slow nod of approval through the spine, but even this trio of exceptions is not wholly involving.

Blood of the Pentagram is raw and lo-fi, and doesn't dabble in crass pretension, so there are likely to be fans out there that will appreciate it just as is, but I cannot count myself as one of them. The songs seem to meander along with very little thought behind them, and though the simplicity itself is not a negative factor, the lack of atmosphere evoked by the compositions seems a critical obstacle, one I could not hurdle even after numerous listens. There are 12 tracks here, 12 stabs in the dark, but only 3-4 of these even land a scratch, and nothing worthy of stitches. As some preamble or accompaniment to a ritual sacrifice, perhaps the raw accoutrement of the writing would suffice, but I just found Gravewürm all too forgettable this time around.