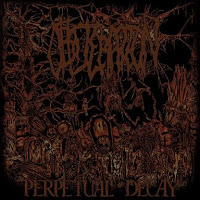 Fans of Obliteration's second, better known record Nekropsalms might have been a little surprised if going in reverse order to discover their full-length debut Perpetual Decay, because while the two albums share an unflinching love for the old school of death metal, there is a discernible difference in their approach. The 2009 sophomore was borne of slow, creepy atmospheres that dredge up the haunted, cavernous morass of being slowly ingested by some ancient, ghastly entity, but its predecessor was fast and firing on many cylinders, picking up from the Total Fucking Obliteration EP and then destroying the material there.

Perpetual Decay is crisp, dynamic and very polished death metal that merges the bleak, grisly influence of US masters like Obituary, Autopsy, Master and Death with the frenetic speed of a Morbid Angel, Deicide, Malevolent Creation or early Suffocation, but in some places you'll also hear some Dutch influence from Pestilence (up to Testimony of the Ancients, in particular the vocals) and Asphyx. In other words, they manage to capture a wide range of their forebears in a very straightforward approach that relies entirely on the strength of its riffs, and fortunate for us all, several of these riffs are the type that, while not so original, are energetic and fun enough that they warrant some repeated attention.

The album sets its pace early with the opener "Sadistic Nekroabortion" and then rarely lets up, though this very track does offer some slower segments of morbid, doom-tinged material. But tracks like "The Abominator", "Breeding the Sick", "Guts and Glory", and the title track are simply bristling with a cryptic, fiendish pallor of frightening cacophony, riffs so slick with blood and muddied graveyard soil that they almost trip over themselves in their haste to devour the brains of the living. "Consumed by Flames" briefly teases us with an old Cannibal Corpse style mosh rhythm, then it too falls in line with the rapid onslaught. Only the dull, forgettable "Instrumental" and the choppy closing tracks "Sepulchral Entity" and "Sinstorm" stop for a last, dying gasp, returning to the hints of death and doom found in the first song, but the last offers yet another explosion after the bridge.

I can't cite Perpetual Decay for being as unique as its slower moving, discordant and foul smelling follow-up, but there are hints here or there of the future progression, encapsulated in the thrust of the writhing mayhem. The performances are praiseworthy, the nostalgia clearly evoked, and so rarely have I heard such an interesting nexus of a band's influences. If you had told me I would be listening to a hybrid of Mental Funeral, The Bleeding, Testimony of the Ancients, Effigy of the Forgotten, Leprosy and Altars of Madness back in the early to mid 90s, I would have creamed my shorts so hard they would have leaked crimson. Yet here it lies, from fucking Norway in the 21st century...