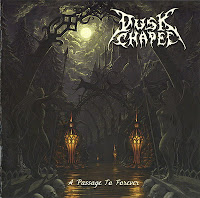 Seven years after the release of the perhaps all too aptly titled debut Almost Forgotten Experience, Ukrainian act Dusk Chapel have finally arrived with a sophomore full-length that capitalizes on a wealth of styles to create something mildly grandiose or epic. The roots of the material are steeped in a slightly technical thrash/death metal hybrid with a lot of mood and atmosphere, and perhaps a hint of Rotting Christ-like black metal aesthetic in the vocals. In fact, I would dare call this record a mesh of mid-period Death (Human, Symbolic) with some of the thick 90s Rotting Christ vocals and a penchant for well executed, melodic thrash metal melodies ala Megadeth or Andy LaRocque's work in King Diamond, a combo you don't often hear, and though the songs aren't drop dead memorable, I can't claim that Dusk Chapel disappoint.

The real ballast here is in the guitar work, with tautly executed leads that add a tasteful layer to the thick and punchy crush of the rhythm section. Take for example "Quasireality" or the cool "Pit of Snakes", in which you're exploring an impressive display of playing skill that never teeters off the edge of some indulgent oblivion. You might categorize the band as 'progressive', though not out of some staggering sense of originality, but in that they stand back and compose riffs that will tickle the imagination, leads and melodies that are not content to be merely brutal or blunt, but to channel elegant landscapes of mystery and suffering that scavenge about the listener's mind like the mitts of a morbid surgeon. This is further expanded upon by the circling wonders of "The Sinister Aura" or the bladed, thrash assault of "Kingdom of Joyless Bliss", the dynamism of the title track or the choppy vistas melded against the night tailing melodies of "Chasing Nightmares".

No, not every song is jam packed with memorable bits, and there is clearly some room for improvement, but considering how far the band have already come musically, the sky is perhaps the only limit here. At times, the vocals might seem a little too simple for the music, but their bloodied mannerism is certainly a welcome contrast with the thinner sequence of the dual melodies. I might also like to hear some better hard-edged riffs here, too often the rhythm guitar feels wan and unimpressive against the busier leads and harmonies. Certainly, though, Dusk Chapel have that rare nuance of sounding like a unique mix of influences, never straying too close to any one corner of their foundation, and by this strength alone the album is digestible. The band might not be tripping over themselves to become the most brutal or technical, but in turn they write songs that are good enough to take note of.